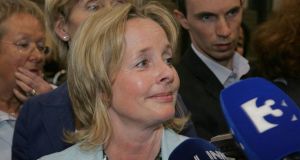 Ireland East MEP Nessa Childers has said she will contest next year’s European elections as an independent rather than Labour candidate. Photograph: Cyril Byrne/The Irish Times.

Labour has lost two elected representatives from its ranks today with MEP Nessa Childers completing her exit from the party and a Meath county councillor leaving for Fianna Fáil.

Cllr Jenny McHugh, a Navan-based school principal, said her decision to defect from Labour was influenced by the hardships she had seen in the education sector since the party entered Government in 2011.

She said she was looking forward to working with Fianna Fáil to play a role “in tackling the unfairness at the heart of this Government’s agenda”.

Ms Childers resigned from the Labour parliamentary grouping in April, saying she did not want to support a Government that was hurting people, but at the time said she would remain a member of the wider party.

In a letter to Tánaiste and Labour leader Eamon Gilmore which she released today, Ms Childers announced her resignation, saying the party was running the country in “a profoundly immoral way”.

She said her ability to work for the policies she was elected on was “no longer compatible with membership of Labour”, and that she felt the party’s leadership had “drifted away from a progressive policy approach”.

A Labour spokesman said Ms Childers was “entitled to run as an independent” and that the party would run candidates in all European election constituencies next year.

This is the second time Ms Childers, the daughter of the late president and Fianna Fáil minister Erskine Childers, has left Labour. She began her political career in the party before the 2004 local elections but when she failed to get a nomination to run for a council seat, she switched to the Green Party and was elected as a councillor. Four years later Mr Gilmore invited her back into Labour and she fought the European elections successfully.

Ms Childers said she intends to remain an independent member of the European Socialists and Democrats Group, the grouping Labour is a member of at EU level. However, she indicated she may not contest the Ireland East constituency again as a result of uncertainty over new boundaries for the elections.

Fianna Fáil leader Micheál Martin described Ms McHugh’s move as “a fillip” which showed his party was moving in the right direction.

“I’m delighted that Cllr McHugh has decided to join the party and I look at it in terms of what it says about Fianna Fáil,” he said.

Ms McHugh said she had sought to join Fianna Fáil and her decision was not influenced by the poor showing by Labour in the Meath East byelection, which covers her Navan base, in March. Labour candidate Eoin Holmes finished fifth and polled just 4.6 per cent of first preference votes.