The ‘special voters’ who have already cast their ballot 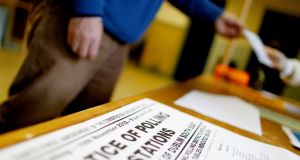 While island voters off the west coast begin casting their ballots a day before the majority of the electorate in the two referendums on Friday, many older voters will have finished casting theirs.

Residents of nursing homes, some hospitals and hospices across the State began voting over a week ago as part of a practice that has been in place for a number of years.

Final votes in nursing homes are expected to be cast today, the day before voters on 12 islands in the constituencies of Donegal South-West, Mayo and Galway West vote in the referendums on same-sex marriage and on the reduction in the age of candidates for the presidency from 35 to 21.

Voters on islands in the Cork South West constituency vote on Friday. Arranmore, with an electorate of 492, Gola (24), Inishbofin (63), Inishfree (5) and Tory Island (141) in Donegal South-West vote with the Mayo islands of Inishbiggle (29), InishTurk (49) and Clare Island (119) tomorrow.

The 19 islands off the west and southwest coasts have an eligible electorate of 2,542.

Returning officers across the State facilitate early voting for older voters in consultation with nursing homes and hospices.

Under election rules, “special voters” can decide to vote early if they are unable to get to a polling station because of disability.