The Anti Austerity Alliance and People Before Profit

Party profile: Out of the ashes of the United Left Alliance has emerged the AAA-PBP 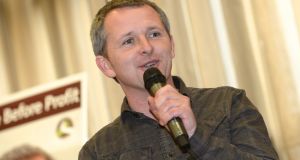 Richard Boyd Barrett at the launch of his election campaign in Dun Laoghaire.

The Anti Austerity Alliance and People Before Profit (AAA-PBP) announced something of a merger last year to campaign on a platform of opposition to water charges and other issues.

The two groups ran alongside each other at the last election too, under the United Left Alliance banner, before the Socialist Party took the AAA name.

Both sets of TDs made political capital out of measures such as water charges, the household charge and its successor property tax but the original United Left Alliance fell apart. Fingal deputy Clare Daly, one of the outstanding TDs of the 31st Dáil, left the Socialist Party in 2012 and the party itself left the ULA in 2013. Daly is now standing as an ‘Independents 4 Change’ candidate. Her running mate is Barry Martin, a Fingal councillor who was elected to the council as a PBP candidate but is running for the Dáil under the Independents 4 Change umbrella.

However, despite the loss of Daly — and Dublin South Central’s Joan Collins, who left the PBP — this crop of left TDs still has some strong performers.

Its standard bearers are People Before Profit’s Richard Boyd Barrett, strongly tipped to hold his seat in Dún Laoghaire, and Paul Murphy and Ruth Coppinger of the Anti Austerity Alliance, who represent Dublin South-West and Dublin West respectively. Murphy won his seat in an October 2014 by-election and rose to national prominence following the Jobstown protests which saw Tánaiste Joan Burton detained in her car.

Others seen as potential gains for the group include Bríd Smith and Gino Kelly of the PBP in Dublin South-Central and Dublin Mid-West respectively. On the AAA side, the group has hopes for Mick Barry in Cork North Central and Cian Prendeville in Limerick City.

AAA-PBP has two candidates running in some constituencies, with councillors John Lyons of the PBP and Michael O’Brien of the AAA both standing in Dublin Bay North, the constituency which saw some of the strongest anti-water charges protests.

Despite their alliance, there have still been differences between the two parties. PBP signed up the Right2Change movement born out of the anti-water charges campaign and responded in kind to Sinn Féin overtures for a vote transfer pact among those subscribing to its principles.

The AAA, however, rejected Sinn Féin’s call for a transfer pact and did not sign up to the Right2Change principles.