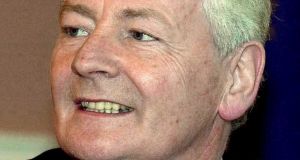 Dinny McGinley: accepted payments related to his time as a primary school teacher for two years while on a ministerial salary of €130,000. Photograph: David Sleator.

A number of TDs, Senators and former ministers have chosen to retain pension entitlements from teaching roles alongside their current salary, according to Department of Education records.

Fine Gael’s former minister for the Gaeltacht Dinny McGinley opted to continue accepting payments related to his time as a primary school teacher for two years while on a ministerial salary of €130,000.

According to official Oireachtas documents, the Donegal deputy donated his pension payments to the State for one year in 2013, but reclaimed them in 2014 after he was removed from his ministerial post.

Independent TD Tommy Broughan and Fianna Fáil Senator Ned O’Sullivan are the only members of the Oireachtas in receipt of a Department of Education pension who have chosen not to register their source of income in a yearly members’ interests list.

Regulations set by the Standards in Public Office commission (Sipo) mean TDs and Senators are expected to declare any remuneration worth more than €2,600 which is not related to their current occupation.

“I gift back to the State a very large portion of my entitlement, so the vast bulk of it stays with the State,” said Mr Broughan, a TD for Dublin North-East and a former member of the Labour Party.

Kerry-based Senator O’Sullivan, who came to national prominence last year for his comments on the threatening behaviour of seagulls in Dublin city centre, was not available for comment.

Both Costello and Kitt have opted to defer their pensions, but only the latter put his entitlement on record. They declined to comment as to whether they would take up their departmental pensions in future in conjunction with other State pensions or payments.

“I have declared the pension in line with requirements set by Sipo and am happy to do so in the interests of transparency. It should be noted that I have retired from my position and paid into the pension during my time in the teaching profession,” said Mayo TD O’Mahony, a former All-Ireland winning coach with Galway.

Serious cases may result in salaries being withheld if the person in question deliberately avoided disclosing a registrable interest, or if the contravention is “of a grave nature”.

Nearly 40 members of the Oireachtas held teaching posts at some stage prior to entering politics, including Taoiseach Enda Kenny and Minister for Finance Michael Noonan.