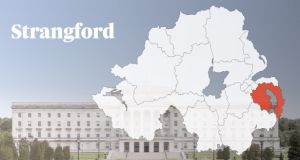 Veteran SDLP candidate Joe Boyle once again came agonisingly close to being the first nationalist MLA elected in the Strangford constituency - before losing out at the death to the UUP’s Philip Smith.

Mr Boyle was ahead of Mr Smith for much of the day, but transfers from a string of both eliminated and elected unionist candidates of various hues did not go his way and for the fourth - and what is believed to be final - time in his political career he lost out at the very end.

At the end of the ninth stage of the counting process, Mr Boyle, Mr Smith and the Alliance Party’s Kellie Armstrong were fighting for two seats.

Ms Armstrong was assured of the fifth seat as she stood on 4,643 votes, just a handful shy of a quota.

Mr Boyle had 3,367 votes while Mr Smith was on 3,676 votes after receiving 772 of the votes of eliminated Independent unionist candidate Jimmy Menagh.

Some 320 surplus votes of the DUP’s Simon Hamilton were distributed and they were enough to ensure Mr Smith and Ms Armstrong were elected.

The final result look like capping a good day for the leader of the UUP, Mike Nesbitt, who had earlier topped the poll in the same constituency - edging out the DUP’s Michelle McIlveen by just 10 votes.

In his acceptance speech, Mr Nesbitt paid tribute to Mr Boyle. “Joe has stood four times and four times he has come very close,” he said.

He said he was “deeply sorry” the popular SDLP candidate had once again come up short, “notwithstanding the fact” that Mr Nesbitt’s running mate was the beneficiary.

Both Mr Nesbitt and Ms McIlveen reached the quota and were elected to the Northern Ireland assembly on the first count.

In the seventh count, Simon Hamilton and Jonathan Bell of the DUP were both elected.

The UUP was anxious to win back the party’s second seat, which it dropped when David McNarry defected to Ukip after the last Northern Ireland Assembly election.

Mr McNarry did not stand this time out, but few if any of the votes he received as a UUP candidate stayed with Ukip.

Its attempts to hang onto a seat in the staunchly Protestant constituency were doomed, with its candidate Stephen Crosby receiving just 759 votes.

Mr Nesbitt cut a relaxed figure as he gave interviews throughout the day.

“It is good that I topped the poll in that it has significance for the party and it has a value on that level but there was only 10 votes in it,” he told The Irish Times.

He said it was too early to say if it would be a good or bad election for the UUP but he added that he would be disappointed if his party finished with less than 17 seats - up one on the number of seats it won last time out.

“In a lot of constituencies it will all come down to the sixth seat and it will depend on how the ball bounces. In the last couple of hours it could swing from being a good election to a bad one. I honestly have no idea how it will pan out.”