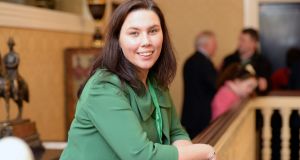 Emma Coffey at the Fianna Fáil ardfheis at Citywest, Dublin. She believes a UK exit from the EU would be a massive blow to Ireland’s relationship with Britain. Photograph: Eric Luke/The Irish Times

The Republic is losing an estimated €300 million annually because of fuel smuggling across the border, Fianna Fáil foreign affairs spokesman Brendan Smith told the party’s ardfheis.

“A fraction of that would resource a cross-border agency with adequate powers to deal with such issues,’’ he said.

Mr Smith renewed his call for the setting up of an agency to deal with smuggling, adding Fianna Fáil would establish it if returned to power.

On the implications for Ireland if Britain exits the EU, Donegal candidate and former minister and MEP, Pat “The Cope’’ Gallagher warned any benefits would be far outweighed by the disadvantages.

He stressed the important role the EU had played in the peace process.

Louth Fianna Fáil candidate Emma Coffey, a solicitor in Drogheda, said unilateral withdrawal by Britain and Northern Ireland would be a massive blow to the relationship between Ireland and Britain.

“The opportunities to work together would be severely restricted,’’ she added.

Ms Coffey said new border controls from Dundalk to Derry would hinder economic development and the free movement of people.

“Personally, I know, from living in the north of the county, about the co-operation from a tourism perspective, between the North and South, has been phenomenal since the peace process,’’ she added. “It has attracted an international reputation.’’

1 Coronavirus: Government to extend restrictions for at least two weeks
2 Chief medical officer urges people not to visit hardware stores
3 Coronavirus: Ireland will have to ‘live alongside the virus’
4 Growing hope in Government of partial easing of restrictions after May bank holiday
5 Coronavirus: Britain on course to be European country worst-hit
Real news has value SUBSCRIBE