Same-sex vote: ‘No’ crosses line in just one of 43 constituencies 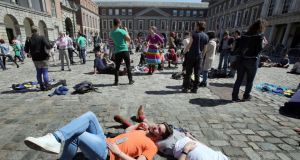 People await the announcement of the result in the same-sex marriage referendum in Dublin Castle on May 23rd, 2015. Photograph: Paul Faith/AFP/Getty Images

Roscommon South-Leitrim has been declared as the only constituency to vote No to the Same-sex Marriage Referendum, and by a slim majority.

Some other constituencies also declared with quite narrow margins, but all on the Yes side.

Donegal North East meanwhile declared a Yes side win at 52.54 per cent, with 47.46 per cent voting No.

No campaigner Ronan Mullen said his side lost out in a “David versus Goliath” struggle with the Yes side.

The Independent Senator said he recognised a clear majority of Irish people were not swayed by the No side’s concerns, but that did not mean that some Yes voters did not share some of those concerns.

“I believe that people chose yesterday to send a message of affirmation and equal respect to gay people and that was their priority yesterday and I respect that,” he said.

However, he said the political system needed to reflect on whether or not there was a “new authoritarianism” in Irish society.

“There is a problem that a third of the voters were not represented by a third of the politicians. I think we need to reflect on that,” said Mr Mullen.

He claimed a “crazy” amount of money from the United States had “poured” into the Yes campaign.

“Some Yes campaigners might be tempted to say Catholic Ireland was executed today and will be buried in a humanist ceremony on Monday,” he added.

“That’s not what this referendum was about. People of all faiths and none are concerned about what marriage means and the importance of fathers and mothers, but they also wanted to send a very positive message to gay people.

“I think that’s what you see in the emotional push for a Yes vote and people coming in from abroad and so on and I honour the love and the decency that’s in the hearts of those people.”

Independent TD Mattie McGrath was one of few Oireachtas members to declare himself a No voter and said on Saturday that he “never expected” the side to do much better than it appears.

“The people have spoken,” he said. “It’s great to see a good turnout. We have to congratulate the Yes side on their victory and hopefully the promises that were made by the Government Ministers will be kept now.”

Asked if he made a political mistake by opting for a No vote, the TD replied “no” and that opponents of the referendum were always up against it.

“I never expected it to be much better, with the whole weight of the political establishment and public sector [in favour], Google, you name it, the Garda Representative Association. You couldn’t fight that and move that mountain . . . I thought it might be even worse.”