Same-sex vote could be run with other April polls

Byelection and referendums including voting age and blasphemy also outstanding 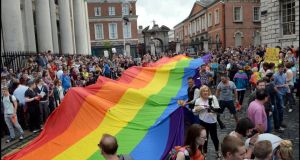 Ministers are expected to weigh up whether they should hold the same-sex marriage referendum on its own or in tandem with a byelection and other pending referendums.

The byelection to fill the Dáil seat vacated by European commissioner Phil Hogan must take place by the end of April, while the Government has consistently said the same-sex vote will take place next spring.

A number of other referendums, arising out of recommendations made by the constitutional convention, are also outstanding. These include lowering the voting age from 18 to 16; reducing the age candidates must be to contest the presidential election from 35 to 21; and removing the offence of blasphemy from the Constitution.

While the likely scenario is holding the Carlow-Kilkenny byelection and same-sex marriage, voting age and presidential candidate referendums on the same day, a final decision had not yet been made. The issue is expected to be discussed today by Ministers at their final meeting before Christmas.

The latest Irish Times/Ipsos MRBI poll showed support for same-sex marriage is rising steadily, with 71 per cent saying they would vote in favour of it.

However, Fine Gael and Labour figures believe the support is soft and are wary of complacency following the 2012 children’s referendum. It passed on a very small turnout after support ebbed away in the months leading up to polling day. The Government intends that the Child and Family Relationships Bill, which provides for the adoption of children by same-sex couples, will be passed into law by the time the referendum takes place.

It hoped this would prevent the issue of adoption by same- sex couples featuring in the referendum debate. According to sources, internal party research has shown support for same-sex marriage drops when the issues cross over.