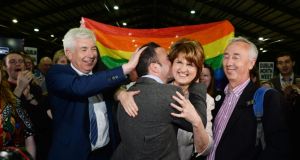 Legislation to provide for same-sex marriage will be delayed until the autumn, the Government has confirmed.

The Court of Appeal has set a date of July 30th to hear a legal challenge brought against the result of the referendum held on May 22nd.

The Dáil rises for the summer recess on July 18th, which means legislation will not be brought forward until its return in mid-September.

Minister for Health Leo Varadkar said the situation was disappointing but the Government could not move forward until the legal challenge was dealt with by the courts.

“If the courts are going to hear a case, we can’t proceed with legislation until that case is decided.

“It is [disappointing] but we have to respect the division of powers and separation of powers that exists between the courts and the Government.”

Two men sought leave to appeal the result of the referendum in the High Court but their action was dismissed.

He is also raising concerns about the secrecy of the ballot because there were CCTV cameras at polling stations.

The decision of the Court of Appeal could be challenged in the Supreme Court.

Because legislation cannot be introduced until at least September, the first same-sex marriages will not be able to take place until 2016.

Some Government Ministers fear the situation could potentially drag on until after the next general election.

Kieran Rose, chair of the Gay and Lesbian Equality Network, said this was distressing for the 62 per cent of voters who had supported same-sex marriage.

“We are most concerned that these appeals are frustrating the overwhelming will of the people as expressed in the referendum. We do not want to see justice delayed for those lesbian and gay couples waiting to marry.

“The 1.2 million people who voted yes will be disappointed that the implementation of their decision continues to be delayed.”

Minister of State at the Department of Social Protection Kevin Humphreys confirmed the Gender Recognition Bill would also be delayed because of its reference to same-sex couples.

One Cabinet Minister described the delay yesterday as “extremely frustrating”.

“This is not within the Government’s control. After the weekend where people celebrated the result of the referendum . . . It is frustrating but there is nothing we can do or say.”