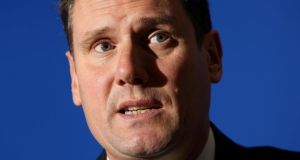 The former director of public prosecutions for England and Wales, Keir Starmer, will conduct the independent review into the manner in which cases relating to allegations made by Maíria Cahill were handled by prosecutorial authorities in Northern Ireland.

The North’s Director of Public Prosecutions, Barra McGrory QC, has announced that Mr Starmer, a high-profile human rights lawyer, will lead the review which was announced last week.

The review will inquire into three interlinked cases involving sex abuse and terrorist-related charges. All arose out of allegations made by Ms Cahill that she was sexually abused at the age of 16 by an IRA man in 1997 and was then forced to meet her attacker as part of an IRA investigation.

All those who faced charges in the cases were acquitted and Ms Cahill also withdrew from the process. The appointment of such a widely recognised legal figure indicates that the review will be far-reaching.

Mr Starmer is familiar with the criminal justice system in the North having served as an adviser to the policing board.

Mr McGrory said: “These cases have been the subject of much public commentary with significant concerns raised. I consider that it is right to have an independent review to maintain and build public confidence in the criminal justice system.”

The review, which will begin early next month, is expected to be complete by spring. Mr Starmer said he would approach the task with rigorous independence and an open mind. “I have been privileged to have spent considerable time in Northern Ireland and have a tremendous respect for its people.”

In response to the news, Ms Cahill said on her Twitter account last night: “I welcome the independent review of the cases. I will consult with my legal team in relation to more information but I will participate fully in the process.”

Meanwhile, Sinn Féin has held out the possibility that most of its members and supporters who had contact with Ms Cahill will meet the Taoiseach. The prospect of a meeting with Enda Kenny seemed remote last week after Belfast solicitor Peter Madden said he would advise four clients – including leading republicans Pádraic Wilson and Seamus Finucane – not to attend.

Ms Cahill had told the BBC Spotlight programme that all four had been involved in an internal IRA investigation of her allegations.

Yesterday, a Sinn Féin spokesman said a letter written by Mr Adams to the Taoiseach requesting a meeting still stood. He said those against whom allegations have been made wanted an opportunity to have their accounts heard.

Sinn Féin has said it has accepted Ms Cahill’s rape allegations but disputes her account of how her allegations were handled. The possibility that some of the four people named by Ms Cahill would attend despite being advised not to was also mooted.

The spokesman also said other republicans identified in the BBC Spotlight programme might also be willing to attend. In his letter to Mr Kenny, Mr Adams wrote that Ms Cahill had made “grievous allegations” against him and Sinn Féin. “Without meeting those involved to hear of their experiences of trying to help Maíria Cahill, you have repeated these allegations and embellished and added to them.”