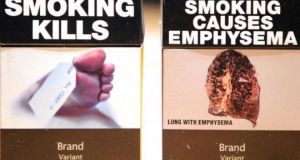 Minister for Health James Reilly will today seek Cabinet approval for draft laws to compel tobacco companies to use plain packaging on all the products they sell in Ireland.

The new law, if endorsed by Cabinet and enacted by the Oireachtas, would ban the use of any logos on packaging or on cigarettes themselves. Graphic warnings would be mandatory on all packaging, and terms such as “low tar” would be forbidden.

Ireland would be the first EU member state to introduce plain packaging legislation, prompting anxiety in the global tobacco industry that an Irish law could set a precedent for Europe.

The initiative comes as Dr Reilly battles to regain momentum in his ministry after damaging missteps over the contentious medical card review, now suspended, and persistent spending overruns in the health service.

These have left the Minister under acute strain as Taoiseach Enda Kenny prepares to reshuffle the Cabinet, a move expected once Labour elects a new leader in early July in the wake of its huge electoral setback last month.

The Minister’s basic aim is to remove the last billboard for tobacco advertising, reducing the incidence of smoking and diminishing the industry’s power to recruit new smokers.

For their part, tobacco companies dismiss the effectiveness of such measures. They also argue that plain packaging would trample over valuable intellectual property rights they own.

Moves to prepare the legislation have already triggered a forceful lobbying campaign by American business and political interests, many of which have raised concern with Mr Kenny directly.

In the days before the Taoiseach visited the US for St Patrick’s Day last March, a coalition of six powerful American business lobbies urged him to abandon the initiative.

While the Government response to such lobbying is that its policy on plain packaging is already settled, the Minister is bracing for a legal challenge to the legislation from the tobacco industry if the Cabinet endorses the measure.

Dr Reilly received a mandate from the Government last November to prepare the plain packaging legislation.

Having circulated the Public Health (Standardised Packaging of Tobacco) 2014 Bill to his colleagues, the Minister is understood to believe there is a “fair wind” behind his proposal within the Coalition.

He plans to swiftly introduce the legislation in the Seanad if it is approved today by the Cabinet. The legislation would go the European Commission and the WTO once it is introduced in the Dáil having cleared the Seanad.

Ireland would be only the third country in the world to introduce a ban if it is approved. The first two were Australia and New Zealand.