Referendum on same-sex marriage to be held in 2015 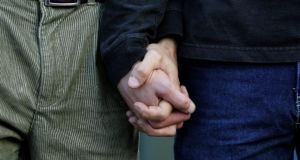 The constitutional convention voted last April to recommend a change in the Constitution to allow for same-sex couples to have a full civil marriage and not just a civil partnership. File Photograph: Justin Sullivan/Getty Images 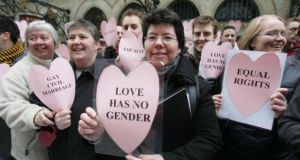 The Cabinet has agreed to hold a referendum on same sex marriage before the summer of 2015.

At their meeting today, Ministers accepted the recommendation of Minister for Justice Alan Shatter that they should follow the advice of the Constitutional Referendum and put the issue of same sex marriage to the people.

It is now expected that same sex marriage and a number of other proposed constitutional changes including a reduction in the voting age to 17 will be put to the electorate in May 2015.

The constitutional convention voted last April to recommend a change in the Constitution to allow for same-sex couples to have a full civil marriage and not just a civil partnership.

More than 1,500 couples have secured civil partnerships in Ireland since they were introduced in 2010.

Grainne Healy, chairman of Marriage Equality, said she was confident that the people of Ireland overwhelmingly support the extension of civil marriage rights to lesbian and gay people. “This referendum is unlike most other referenda, it’s not concerned with politics or economics, it’s about Ireland valuing its citizens equally. Introducing marriage equality to Ireland would strengthen our reputation as champions for human rights and equality.”

Mark Kelly, director of the Irish Council for Civil Liberties, said the support from the Constitutional Convention for the change in law was a clarion call for equality. “When the people of Ireland vote on this issue in 2015, we will be participating in a final act of legal recognition of the full equality of our gay and lesbian colleagues and neighbours, friends and family,” he said.

The Iona Institute, which describes itself as a pro-marriage, pro-religion think-tank, said bringing in the reform was about redefining marriage. Spokesman Dr John Murray said: “This debate is really about the value we attach to a child having a mother and a father as distinct from two fathers or two mothers.” The Union of Students in Ireland said it would be asking its members to vote in favour in a referendum.

This morning, Tanáiste Eamon Gilmore said it was important that the Government “win” any referendum on same-sex marriage.

Speaking on his way into the Cabinet meeting this morning, Mr Gilmore said it is important for the Government to “win” the referendum.

“ It is an important issue and we know from referenda on social issues before that it is important to do some preparation before the referendum is held,” he said.

Minister for Finance Michael Noonan said he also supported the principle of gay marriage and had no objection to it. “If we’ve learned anything we’ve learned that different lifestyles should not only be accepted but celebrated,” he told reporters today.

There could be an age divide on the issue among the public, he said. “I have met nobody under 40 who is not in favour,” he said.

Minister for Public Expenditure Brendan Howlin indicated the majority of Cabinet believed there should be a referendum on same-sex marriage.

Mr Howlin said the Constitutional Convention was very strong in its recommendation that there should be a referendum. This was “probably the opinion of the majority of Cabinet”.

A number of Fine Gael TDs have expressed the fear that a referendum next year so soon after the defeat of the proposal to abolish the Seanad could lead to another defeat for the Government.

Speaking to reporters yesterday, Mr Shatter said he suspects the general public are suffering from referendum fatigue. “Having been in the Dáil for many years, I can’t recall so many referenda taking place within such a short space of time on so many very important issues. It may well be the case that 2014 is a referendum-free year and that if further referendums take place, possibly they should be in 2015.”

Apart from “referendum fatigue” Fine Gael TDs have also expressed a range of worries about holding a referendum on the issue in the next year or so. One reason is that local and European elections will be held next May and they fear any referendum before that date could prove a distraction.