Purchase of sex to be criminalised under new law 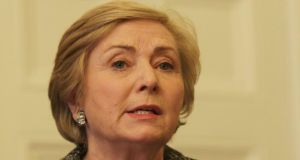 Minister for Justice Frances Fitzgerald: has abandoned moves by her predecessor, Alan Shatter, to lower the age of sexual consent from 17 to 16. Photograph: Stephen Collins/Collins Photos

People who pay for sex will face criminal sanction under new laws that have been approved by the Government.

At its weekly meeting, the Cabinet agreed to proceed with legislation to criminalise the purchase of sex and the engagement of prostitutes.

The new sexual offences legislation will also strengthen laws on grooming, child pornography and harassment. In addition, it will include provisions on the age of consent that will copperfasten the current lower age limit of 17.

On the age of consent issue, Minister for Justice Frances Fitzgerald has abandoned moves by her predecessor, Alan Shatter, to lower the age of sexual consent from 17 to 16.

Ms Fitzgerald brought a memo to Cabinet on the issue seeking approval to prepare legislation to criminalise the purchase of sexual services without criminalising the sellers of the services.

Her aim is to transfer some of the burden of responsibility from sex workers, some of whom are exploited and trafficked, onto those who avail of prostitution services.

The detailed legislation, containing 70 sections, will include measures to broaden the definitions of some sexual offences and strengthen measures so that offences will be easier to prosecute.

The Immigrant Council of Ireland has welcomed the move, which it said was an important first step in “wrecking the business model” that had allowed pimps and traffickers to profit from exploiting women.

The Council has been lobbying heavily for changes in the legislation for quite some time, highlighting the high number of women who have been trafficked into the trade, as well as violence, criminal and sexual assaults, and exploitation that are commonplace.