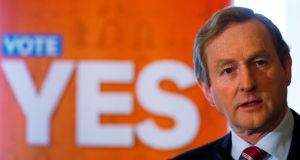 The proposal to reduce the minimum age for presidential candidates was always going to be the orphan referendum as the nation focused on the more intriguing same-sex marriage poll.

Taoiseach Enda Kenny appeared energised by the marriage campaign, but his promotion of the presidential age proposal seemed half-hearted in comparison.

Towards the end of the campaign, he attempted to explain that a Yes vote would be most unlikely to mean the election of a 21-year-old as the first citizen of this State.

But by that stage the idea of a callow youth getting his or her unblemished hands on constitutional powers, including the authority to dissolve the Dáil and refer Bills to the Supreme Court, had spooked a portion of voters.

As a whole the Government-backed campaign to lower the candidacy age from 35 to 21 never really took off.

The proposed 35th amendment to the Constitution is destined to be the forgotten referendum as voters took their cue from unenthusiastic, distracted politicians.

Junior Coalition partner Labour, made clear last month it would not even take a position on the proposition, preferring to concentrate its campaigning firepower on ensuring the same-sex marriage referendum was passed.

The media was not enthused either, despite efforts by academics such as Colum Kenny, a No voter, to generate interest.

Many voters wondered why they were being asked to reflect on an issue they considered irrelevant to their daily lives. Some regarded it as a waste of time and money, and it made them angry.

The idea originated at the Constitutional Convention, a forum of 100 people, representative of Irish society, with an independent chairman.

Reducing the eligibility age for the President, bringing it into line with the requirements for TDs and Senators, was just one of a large number of recommendations the Convention made.

Quite why the presidential age question was selected as the one to go before the people was never explained.

However, it seems likely the move was an attempt to cover up the fact that the Government was abandoning plans to hold a referendum to reduce the voting age from 18 to 16, despite a commitment made in 2013.

As the Coalition’s term progressed, considerable opposition emerged from senior figures in both Government parties to the proposed reduction in the voting age.

Labour used to be in favour of giving younger people the vote, but now fears that cohort is gravitating towards Sinn Féin.

There were reports on Saturday of a number of panicky punters opting for a Yes vote in both referendums, lest they voted No in the marriage referendum by mistake.

But the people never took the presidential age referendum to their hearts.

Many believe the experience that comes with advanced years is an advantage for presidents. In the last contest, the eldest candidate Michael D Higgins (then 70) saw off the youngest Sean Gallagher (then 49).

Mr Higgins’ deportment as he represents Ireland around the world has been widely praised since.