Politics is all about acquiring office and retaining it 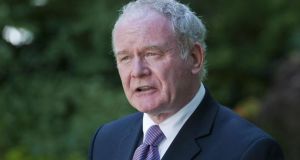 ‘There is a ring of truth to what Peter Robinson said at the weekend about Sinn Féin. He said Martin McGuinness (above) had agreed on welfare “reform” in Northern Ireland, which means devastating the lives of vulnerable people by cuts in social supports, but that had been vetoed by Sinn Fein in Dublin.’ Photograph: Will Oliver/PA Wire

It hardly matters whether Alan Shatter stays or goes as Minister for Justice. Ditto James Reilly as Minister for Health. Ditto for the rest of them. A bit of accountability here or there would be welcome, by way of resignation or removal, but aside from that it doesn’t matter at all.

Whoever replaced Alan Shatter would do no different but he/she might be a little less annoying. James Reilly is not that annoying, so replacing him would make no difference at all, unless he was replaced by Alan Shatter. The Labour Party fully deserves electoral annihilation and perhaps that might be a lesson to others not to abandon almost everything they said they stood for when they sought election.

Those who voted for Fine Gael or Labour in the last election and expected a “democratic revolution” discovered the Government did exactly the same as the reviled outgoing government. The Government adopted, with a few minor alterations, the programme of the previous government and has taken credit for implementing it.

A Fianna Fáil/Sinn Féin government would do the same as a re-elected Fine Gael- Labour government. Sinn Féin would do quite a bit of strutting in the first months of office but once it settled it would be the same as before.

There is a ring of truth to what Peter Robinson said at the weekend about Sinn Féin. He said Martin McGuinness had agreed on welfare “reform” in Northern Ireland, which means devastating the lives of vulnerable people by cuts in social supports, but that had been vetoed by Sinn Féin in Dublin, because it has placed its electoral interests in the Republic ahead of its interests in Northern Ireland.

Sinn Féin would be so excited by being in government in Northern Ireland and the Republic at the same time that it would forfeit what is left of what it stands for to attain and maintain that status.

Anyone who has doubts about Sinn Féin’s opportunism need only recall its conduct before the 2007 election when it became excited by the prospect of government with Fianna Fáil. Suddenly its radical tax strategy was jettisoned in a show of “responsibility” that would have enhanced its appeal to Fianna Fáil as a domesticated coalition partner. Fianna Fáil, as it happened, didn’t need it.

As for Fianna Fáil refusing to coalesce with Sinn Féin – solemn promises will be made to that effect by both Fianna Fáil and, incidentally, by Fine Gael, ahead of the next election and they will have the same relevance and effect as other election promises.

For politics here is all about acquiring office and retaining it. Policies are mere props to that end. Focus groups will identify the best props. Conviction has nothing to do with it. It is all about trivia.


Media focus on trivia
All this is rendered more depressing by the media’s focus on the trivia: which party has gained or lost a few points in the opinion polls (even on these terms there is widespread misrepresentation for the margin of error is usually ignored or its significance diminished); which personality has gained or lost precedence within parties; what parties has gained advantage/ disadvantage from constituency boundary changes; and whether a policy will “sell”.

There is hardly any point in suggesting constitutional changes that would render politics meaningful, such as denying politicians “office” – having each new Dáil elect a taoiseach who then, with the approval of the Oireachtas, would appoint a cabinet, none of whose members would be members of the Oireachtas but all of whom would be meaningfully accountable to the Oireachtas. Or imposing a constitutional barrier to anyone being elected to the Oireachtas more than twice, thereby freeing Oireachtas members from the tyranny of the re-election imperative. Yes, this latter move would forfeit the benefit of prolonged Oireachtas experience but with the advantage of involving more people in representative politics and abolishing the “political class”.

There is no point proposing such remedies for they will never happen as, under the present constitutional arrangements, supplemented by the present institutional practices, no changes can happen without the approval of the parties in government and they are never going to offer the people an opportunity to do away with office and the prospect of lifelong political careers.

It seemed briefly when the crisis broke in the autumn of 2008 that there was an opportunity for radical change. It was a mirage.