Paying for sex to be criminal offence under new Bill

Person offering sexual services will not be guilty of a crime 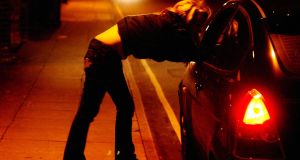 File photo of a prostitute talking to a driver. Photograph: PA Wire

New legislation on sexual offences criminalises paying for sex with prostitutes, but ensures the person offering sexual services is not guilty of a crime.

The draft law also corrects an anomaly in law by aligning the penalties for incest whether the offence is committed by a man or a woman.

Minister for Justice Frances Fitzgerald published the Criminal Law (Sexual Offences) Bill 2015 on Wednesday, saying she was committed to addressing “the very real and tragic crimes of trafficking and exploitation” associated with prostitution.

“I am convinced that targeting the demand for such services is the way forward,” she said.

Ms Fitzgerald said her proposals mirrored the approach adopted in Northern Ireland and other jurisdictions which she said had seen a reduction in demand for the services provided by prostitutes.

“This Bill reflects an all-island consensus to targeting the predominantly exploitative nature of prostitution,” she added.

Two new offences will be introduced which criminalise paying for sexual activity with a prostitute. In both cases, the person providing the sexual service is not regarded as having committed an offence.

Ms Fitzgerald said this would address a “gender anomaly” in the current law relating to incest.

The wide-ranging Bill was welcomed by the Rape Crisis Network Ireland (RCNI).

“This long awaited legislation is one of the most important advances in the legal framework around sexual violence crimes in recent years,” the organisation’s acting director Clíona Saidléar said.

However, she expressed disappointment that there was “no definition of consent” in the Bill.

The age of consent remains at 17. However, a “proximity of age” defence will be introduced where the sexual act is a non-exploitative, consensual act and the parties are aged within two years of each other.

The Minister said: “This simply recognises the reality that young persons can engage in consensual sexual acts.”

The National Women’s Council of Ireland welcomed the publication of the Bill but also expressed some concern.

“A statutory definition of consent would challenge the stereotypes on rape and spell out the elements necessary to constitute genuine consent to sexual engagement,” the organisation’s health and human rights office Jacqueline Healy said.

Minister for Children and Youth Affairs James Reilly said the Bill recognised the reality of modern life for children and young people, and the new ways in which they can be at risk.

“With the growing use of social media, it is important that there are new offences to criminalise adults who contact children for purposes of sexual exploitation either online or by mobile communications including texts,” Dr Reilly said.