Parties to make final pitches to voters ahead of election

Stephen Collins and Fiach Kelly of The Irish Times, react to the final leaders' debate ahead of the general election. 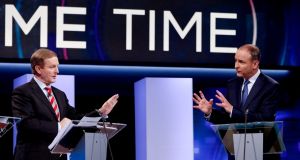 None of the four party leaders landed a killer punch in Tuesday’s pre-election television debate, but Tánaiste Joan Burton put in a notably stronger performance than in the earlier debates.

She appeared more relaxed than earlier in the campaign and gave full responses to the variety of issues that emerged in the course of the exchanges.

As well as challenging the Opposition leaders, she also differentiated Labour from Fine Gael on tax policies.

All the party leaders did enough in the RTÉ Prime Time debate to keep their supporters happy.

Fianna Fáil leader Micheál Martin did not dominate as he had in the earlier debates and his opponents managed to move the focus to his record in government.

Taoiseach Enda Kenny tried to keep Mr Martin on the defensive over Fianna Fáil’s track record while setting out Fine Gael’s plans on a number of issues, emphasising stability and fairness.

However, he refused to answer a question from moderator Miriam O’Callaghan about whether he thought the Fine Gael plan to abolish the Universal Social Charge (USC) was fair as high earners would benefit most. Mr Kenny said repeatedly that every worker in the country would benefit from the abolition of the USC regardless of income.

Mr Adams challenged Ms O’Callaghan at one stage in the debate about whether she earned over €100,000 and when she confirmed that she did he said she should declare a conflict of interest.

Ms Burton challenged Mr Adams over his criticisms of the Irish health service, saying he had no credibility on the issue. She said the Sinn Féin leader was so privileged he was able to jet off the America to avail of private health care there.

“What cloud cuckoo land do you live on?” she asked.

Mr Adams said that a friend had paid for his operation. He said he had explained on a number of occasions that the treatment was not available in Ireland, North or South.

The Tánaiste also challenged Mr Adams when he accused the Government of looking after the better off. She pointed to the conviction of his friend the “good republican” Thomas “Slab” Murphy for tax evasion.

Later in the debate Mr Martin also raised the conviction of Mr Murphy by the Special Criminal Court.

During the debate on the question of cronyism Mr Kenny referred to having appointed John McNulty to a State board last year and Mr Adams claimed this represented an admission that the Taoiseach had previously refused to make.

The Taoiseach accepted that many people were not feeling the economic recovery, saying the challenge was to bring it to every home. That was why Fine Gael planned to abolish the USC. He pointed to the Government’s jobs record of having created 160,000 new jobs over the past five years and said that gave credibility to the Fine Gael plan to create 200,000 over the next five years.

Mr Martin conceded Fianna Fáil had made mistakes but he insisted he had learned from them.