Wallace told he would be ‘sorted’ for Nama North claims 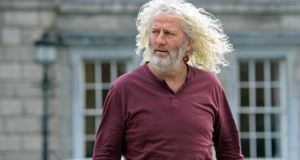 ‘Now why would they say that if I was telling the truth?’ Independent TD Mick Wallaceasked Taoiseach Enda Kenny. Photograph: Eric Luke / The Irish Times

Mick Wallace has claimed a representative of investment firm Cerberus told him he was “going to get sorted” for making allegations in the Dáil about its purchase of a loan portfolio from the National Asset Management Agency (Nama).

Describing Cerberus as “serious players”, the Independent TD said:“I was summoned to a meeting by a public figure and a message was passed onto me from a leading member of Cerberus Ireland that I was going to get sorted.

“Now why would they say that if I was telling the truth?” he asked Taoiseach Enda Kenny.

He also claimed a developer whose loans were in the Northern Ireland loan portfolio Project Eagle, “came to Nama to complain about being approached by fixers who were looking for a backhander in order for him to buy his loans back at 50p in the pound in the autumn of 2013, months before Cerberus even bought it”.

He asked if Nama reported this to local law enforcement or to the Government.

He asked the Taoiseach to “seriously look at the questions swirling around Nama”.

Mr Wallace has repeatedly raised concerns about the sale of the loan book of 800 properties in Northern Ireland, and the payment of €45 million in “fixers” fees to a number of individuals.

The Wexford TD has also repeatedly questioned the operations of Nama and claimed there was something “seriously rotten”.

But Mr Kenny said “there is nothing wrong on the seller’s side here. If there’s anything wrong it seems to be on the purchaser’s side.”

The Taoiseach added: “It’s not good enough for you to come in here” without proof. He said “ if you are the centre of attention for receiving these kinds of allegations, I hope that when they’re made to you that you demand proof be given because you have full privilege in here and I’m sure you want to use that with responsibility”.

He told Mr Wallace: “I’d suggest you write out your list of questions. You need to use the facility available to public representation in the public interest,” the Oireachtas Public Accounts Committee.

Hitting out at the way Nama operated, Mr Wallace claimed that in January 2014 a US company acquired a number of properties for €100 million from Nama and was now selling them for €170 million. He said the buildings were yielding 6 per cent a year in rents “but there was still a panic to sell them”.

Mr Wallace then referred to a a confidential letter from law firm Brown Ruddnick to the Minister for Finance in the North, admitting acting for two clients in Project Eagle, for Pimco and Cerberus, which was not legal.

He said the matter was now being investigated by the Securities Exchange Commission in the US.

He also repeated calls for Cerberus to be disqualified from the sale of Project Arrow, a portfolio of loans in Britain and Ireland, 50 per cent of which was housing in the State.

He said they should be disqualified because they were involved in two criminal investigations.

Mr Wallace said the sale should be stopped. “What is the logic of selling something like Project Arrow, when 50 per cent of it is housing units in the Republic, when we have a housing crisis?”

He challenged Mr Kenny: “Taoiseach is it going to be on your legacy that you ignored all this”.

Mr Kenny said that was another allegation the Wexford TD was making and insisted “it will not be part of our history. Nama is responsible to the Houses of the Oireachtas here of which you are a member.

“You come in here week after week with very strong statements and allegations. I can’t say whether what you say it true or not, whether you can back that up.”

He suggested that perhaps Mr Wallace did not want the issues raised through the body to whom Nama is responsible, the Public Accounts Committee.

“I’d like you to furnish to the Public Accounts Committee the basis of the evidence given to you that will make the allegations you made stand up.

“I do hope you supply the full list of questions that Nama can comprehensively answer at the public accounts committee.”