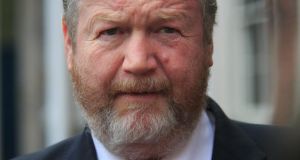 “What is needed now is that the authorities have the information they need to do their job - protecting and supporting survivors of abuse and as far as possible, preventing future abuse,” Minister for Children James Reilly said. Photograph: Gareth Chaney/Collins

Child and Family Agency Tusla has received “some non-specific” information from survivors of sexual abuse, Minister for Children James Reilly has confirmed.

He said the possibility that alleged abusers in Northern Ireland were moved into the State by republican or IRA action and that they could present a current risk to children “is of deep concern”.

Dr Reilly told the Dáil: “In this regard, Tusla confirms that it has received some non-specific information from survivors, and this information is being rigorously pursued to determine any issues arising for agencies in this jurisdiction.”

He said the investigation of alleged offences fell to the Garda, and it was “imperative that anyone, anyone with information about potential risk to children, passed that on to the authorities without delay”.

Speaking during the five-hour debate on allegations of child sexual abuse by republicans, Dr Reilly said the State now had the structures, legislation and clarity about roles in place.

“What is needed now is that the authorities have the information they need to do their job - protecting and supporting survivors of abuse and as far as possible, preventing future abuse.

“For if we are to address the failings of our past then we must recognise that we all have a duty to put children first - all of us, all the time. Otherwise we will fail our children again.”

Fine Gael TD Fergus O’Dowd said the fundamental issue in the debate was that a 16-year-old child had been raped.

A constituency colleague of Sinn Féin leader Gerry Adams, he said the perpetrator was allegedly a close family member, “and the matter was reported at the time to the IRA, of which Deputy Gerry Adams claims never to have been a member.

“What happened is that the perpetrator was apparently banished to somewhere else. The key issue today concerns whether the victim can have justice.”

Fianna Fáil justice spokesman Niall Collins rejected Sinn Féin “spin” against his party that they were “seeking to gain some kind of cheap political advantage”.

He said “we have been working with Maíria Cahill for over two years. However, those in Sinn Féin did not hear about our involvement during that period.

“Details of this only emerged when Ms Cahill decided to go public. We did not seek to obtain any cheap political advantage during the past two years.

“We make no apologies for seeking to represent someone who has a genuine case.”