State’s most bizarre body to advise on abortion Bill 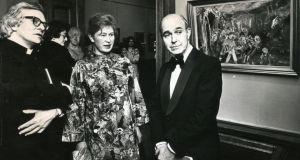 President Michael D Higgins’s decision to summon the Council of State on Monday to discuss the constitutionality of the Protection of Life During Pregnancy Bill has put the focus on what is probably the State’s most bizarre institution.

Its job is to advise the President on the rare occasions when he or she wishes to exercise one of the reserve powers detailed in the Constitution. The President is not obliged to accept the advice, however, no matter how overwhelming.

The council meets on only a handful of occasions during a normal seven-year presidential term. Advising the incumbent on whether or not to refer a Bill to the Supreme Court is the most common reason for a meeting.

The current council is the biggest, with 24 members, as a result of the number of former taoisigh and chief justices still living. It comprises senior serving and retired politicians and judges, as well as seven members appointed by the President when he took office.

Meetings of the council take place behind closed doors and, as with Cabinet discussions, no detailed record is kept about what is said by individuals. Nor is there a record of those for or against the referral of any particular Bill to the Supreme Court .

A rare insight into what happened at one of the most controversial meetings of the council was given to me some years ago by the late Jim Dooge, cathaoirleach of the Seanad from 1973 to 1977. As cathaoirleach he attended the crucial meeting of the council in September 1976 that discussed the Emergency Powers Bill passed by the government in response to the murder of British ambassador Christopher Ewart-Biggs in Sandyford, Co Dublin, by the Provisional IRA.

Cearbhall Ó Dálaigh
The then president, Cearbhall Ó Dálaigh, who was already on poor terms with the Fine Gael-Labour coalition led by Liam Cosgrave, and had threatened to resign on a number of occasions, summoned a meeting of the council.

As Dooge recalled, the president was more intent on proving he was entitled to refer the Bill to the Supreme Court than on expressing much concern with the contents of the legislation.

“Tom O’Higgins was there as chief justice and said that since the matter might come to the Supreme Court he wouldn’t give any advice to the president. But Tom Finlay was there as president of the High Court and he gave devastating advice that there was no point referring it to the Supreme Court. The legislation was so clearly constitutional that it was a waste of time,” said Dooge.

Ó Dálaigh proceeded to refer the Bill to the Supreme Court, despite the contrary advice and to Cosgrave’s deep annoyance. Minister for defence Paddy Donegal subsequently described the president as “a thundering disgrace”. Ó Dálaigh resigned and the government suffered a strong public backlash that counted heavily against it in the general election the following June

Two key members of that council of State, Cosgrave, now aged 93, and Finlay, 91, are members of the current body.

One of the council’s anomalies is that the Chief Justice can be asked to advise on the constitutionality of a Bill on which she or he will be asked to adjudicate if it is referred to the Supreme Court.

Going on Dooge’s account of the 1976 meeting, it is likely that successive chief justices have not given their legal opinions at council meetings but left it to the president of the High Court. If that happens on Monday the Chief Justice, Mrs Justice Susan Denham, will not give her opinion, leaving the president of the High Court, Nicholas Kearns, with a very important role to play.

Another anomaly this time is that two serving members of the Supreme Court will be at the meeting. Former chief justice John Murray, who was required to retire from that position at the age of 70 but who remains on the court until the normal retirement age of 72, will be there too.

Unique position
Murray is in a unique position for another reason. He was the attorney general in the Haughey government that, in the autumn of 1982, signed off on the draft of Article 40.3.3, which inserted the rights of the unborn into the Constitution.

Attorney General Máire Whelan is one of seven women on the council, by far the biggest number to serve on the body. She will play a crucial role in putting the legal argument on behalf of the Government as to why the Bill complies with the constitution.

Taoiseach Enda Kenny and Tánaiste Eamon Gilmore can also be expected to argue why it should not be referred to the Supreme Court, even though some of their colleagues in the Government have publicly said they would welcome a referral.

Former Taoiseach John Bruton expressed strong opposition to the Bill during its passage through the Oireachtas and is likely to argue that it should be given to the Supreme Court for a definitive decision.

The summoning of the council does not mean the Bill will be referred. President Mary McAleese summoned the body eight times during her 14 years in Áras an Uachtaráin to advise her on the constitutionality of legislation. On the three occasions when she referred Bills to the Supreme Court it upheld two and struck one down.

There is a range of political and legal arguments for and against referring this Bill but ultimately it is a decision for the President alone. He will have to make up his mind by the end of the week.