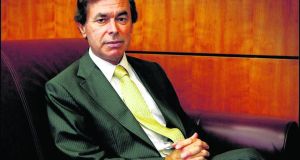 Former minister for justice Alan Shatter. Mr Shatter said it was “nonsense” to suggest he had an animus towards the Bar Council but the council operated, he said, under the motto nolumus mutari or no change. Photograph: David Sleator/The Irish Times

Former minister for justice Alan Shatter launched a broadside against the Bar Council during debate on amendments to the Legal Services Bill. The Bill provides for what has been described as the biggest reform of the legal profession since the foundation of the State.

Mr Shatter said there were vital reforms in the legislation, which he had introduced in the Dáil when minister, but there was “resilient opposition” to it, in particular from the Bar Council, which represents barristers.

Mr Shatter said it was “nonsense” to suggest he had an animus towards the Bar Council but the council operated, he said, under the motto nolumus mutari, or no change. He claimed the Bar Council in the past six weeks had “gone into overdrive” trying to “effectively oppose every substantial reforming measure that could change the manner in which barristers undertake their work”. During debate on two justice-related Bills he criticised senior counsel Seán Guerin, whose report led to his resignation.

Mr Shatter renewed his call on the new commission to investigate how the report was compiled, claiming failure to comply with basic fair procedures, constitutional justice and natural justice.

Mr Shatter repeated his criticisms during debate on the Legal Services Bill and said the Bar Council’s code of practice did not deal with “the conduct of barristers when they are asked to conduct inquiries into matters where court proceedings are not involved”.

He said Mr Guerin was put in charge of an investigation involving Mr Shatter at a time when he was opposing legislation the then minister was steering through the House.

Labour TD and barrister Michael McNamara said: “Regardless of Mr Guerin’s report . . . Mr Guerin was appointed by the Government, not by himself and the Government set out his terms of reference, he did not set them out.”

Moving Luke Kelly sculpture suggested as response to vandalism 16:00
Two men arrested for questioning about raid on bookmakers foiled by pensioner 15:43
Police officer ‘kicked in the face’ while clearing crowd from beach 15:30
Irish tourists excluded from visiting Greece as country begins its tourism season 15:07
Firefighters battle to keep forest fire away from an explosives factory 14:55

1 Irish tourists excluded from visiting Greece as country begins its tourism season
2 George Floyd death: Teenager dies in clashes as protests spread across US
3 Police officer ‘kicked in the face’ while clearing crowd from beach
4 Quarantine will cease within fortnight, Ryanair CEO claims
5 Firefighters battle to keep forest fire away from an explosives factory
Real news has value SUBSCRIBE