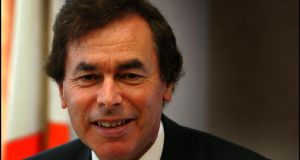 Minister for Justice Alan Shatter: System ““will assist in finding and identifying missing or unknown persons” and will play crucial role in investigations of “cold cases” and the identification of perpetrators. Photograph: David Sleator

The creation of a DNA database for Ireland moved a step closer after Minister for Justice Alan Shatter introduced what he called “landmark legislation” in the Dáil yesterday.

The Criminal Justice (Forensic Evidence and DNA Database System) Bill will assist in the investigation of serious crime and “will assist in finding and identifying missing or unknown persons”, Mr Shatter said.

It will also play a crucial role in investigations of “cold cases” and the identification of perpetrators. The Minister added that it would also assist in cases where there was an alleged miscarriage of justice.

Eighteen EU states currently have such a system.

A DNA database was first considered more than a decade ago and Mr Shatter described the Bill as comprehensive and fair between human rights and the optimal use of DNA in crimefighting.

The Bill allows DNA samples to be taken from most people suspected of a crime and creates rules around the period of retention of the sample on the database, depending on whether the individual is convicted or not and the seriousness of the offence. Samples cannot be taken from children under 14 years of age.

Mr Shatter said Ireland would meet its EU obligations which required the State to maintain DNA and fingerprint databases and facilitate searching on a reciprocal basis.

Fianna Fáil justice spokesman Niall Collins supported the Bill and noted it would cost €3 million to establish and about €1.5 million annually to run. He warned the Minister to provide for the estimated 29 extra staff to deal with the additional workload.

Sinn Féin spokesman Pádraig Mac Lochlainn said lawful and effective collection of forensic evidence could be crucial for sound convictions not based on confession evidence alone.

He supported the call by the Irish Council for Civil Liberties that “profiles or samples should never be transmitted to states that cannot guarantee they will be protected by appropriate privacy safeguards”.

Mr Mac Lochlainn also asked why the Bill was not submitted to the Irish Human Rights Commission for its consideration.

Independent TD John Halligan expressed concern Ireland would follow the US which declared it legal to take swabs from suspects without a warrant and some states which required DNA collection from people convicted of low-level crimes such as shoplifting and drugs-possession.