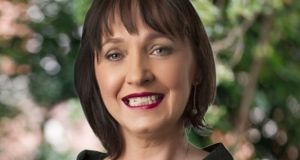 Fiona O’Loughlin (Fianna Fáil) is originally from Rathangan and now lives in Newbridge, Co Kildare. A former primary schoolteacher, she comes from a local political dynasty; her father Jimmy served on Kildare County Council for 20 years and her grandfather, Joseph, was a member of the first local council in 1899. O’Loughlin became involved in local politics in 1994 when she was elected to Newbridge Town Commission. She was re-elected 1999, and was also elected to Kildare County Council and hhas held her seat there since. She topped the poll at the local elections in 2014, and was Mayor of Kildare for 12 months. She has worked with charities including People in Need and Special Olympics and has advocated for people with intellectual disability in Europe. – FIONA GARTLAND