Tánaiste insists she cannot involve herself in agency 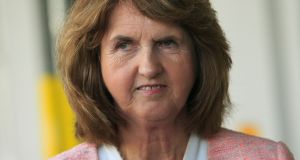 Talking about Nama, Tánaiste Joan Burton said: “We made a decision that politicians should be removed out of the process.” Photograph: Gareth Chaney/Collins

Tánaiste Joan Burton has said she would be “perfectly happy’’ to see Nama co-operating with the investigation in the North into the controversial sale of its Northern Ireland portfolio.

She insisted, however, she could not instruct Nama to do so, adding it was an agency which operated, as far as possible, with a remit which was free from the day-to-day pressures of politics.

“We made a decision that politicians should be removed out of the process,’’ Ms Burton added.

When Nama was set up, it was agreed that politicians should not be involved, given the history of the property bubble and overly-close connections between some political parties and developers and banks, she said.

Ms Burton said there was nobody in the House not interested in hearing the responses to some of the allegations where were thrown around the place. The Public Accounts Committee (PAC) was having a hearing on the issue, she added.

The Tánaiste was replying in the Dáil on Thursday to Fianna Fáil TD Billy Kelleher, who said the Government had responded to serious allegations with a “deafening silence’’ . The property portfolio involved was valued at about €1.6 billion, he added.

He said the issue went beyond Northern Ireland.

“Nama was established by the Houses of the Oireachtas, Tánaiste, and it is the credibility and integrity of this House which is being brought into disrepute because we are unable or unwilling to set up some form of investigation,’’ he added.

The idea that drip-feed allegations would continue to be made, and remain unanswered and not investigated, was simply not credible or tenable, he added.

Mr Kelleher said the Government should facilitate “a proper, robust investigation’’, allowing Nama to appear before the inquiry in the North.