Important changes should have been made before building started again, says Murphy 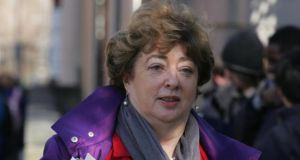 Catherine Murphy: claimed Bills to reform the construction industry “fall way behind” on the Dáil schedule

Legislation the construction sector most wants to see changed is on the Government’s priority list while Bills to reform the industry “fall way behind” on the schedule, the Dáil has heard.

Independent TD Catherine Murphy said there was significant lobbying around a range of issues such as development contributions and the position of particular Bills on the A list for being dealt with by the Dáil showed the strength of the construction sector.

Ms Murphy was speaking during debate on the Registration of Lobbyists Bill, which aims to regulate the lobbying of those in public office.

She said “we are moving back into construction without having repaired the problems or addressed the issues involved”, adding that the Government had short time left in office and important changes that should have been made before construction started again had not happened.

The Kildare North TD said “we see people who have been incredibly lucky in this country and they seem to be in the know”.

Ms Murphy acknowledged she was not supposed to mention names “but when you start to look at mobile phone licences, water meters, owning hospitals and newspapers, it is very difficult not to think of one particular individual who is all powerful”.

She believed it was “quite incredible how a small number of people have become so wealthy and powerful and that they have not done so without influence and having access to individuals who have power”.

She said that by itself showed the need for this legislation “to work and for us to make sure it is made to work”.

Government backbencher Michael Creed said “I am a lobbyist and I am lobbied”. He said he was “invariably at the back of the chamber bending a Minister’s ear” and would be at the receiving end of the legislation because he would have legal requirements placed on him as a TD who was lobbied.

Mr Creed asked why the judiciary, Garda and the HSE were not mentioned because they played very significant roles.

Minister for Public Expenditure and Reform Brendan Howlin, who introduced the Bill, said it would take time to “bed” in the legislation because of the transformative change involved. He said that no one should have any fear about being publicly identified as lobbyists. “If we have that in a robust, transparent way, we might restore the tarnished view of lobbyists that many members of the House have expressed.”

Mr Howlin also defended Ireland’s clientelist system and said it was “not only a very important strength of our democratic system it is an anchoring strength”.

He said he could attend very important European Council meetings and still have to deal “rightly, with the minutiae of one’s constituency problems”.

Gabriel Scally not asked to step down from CervicalCheck role by Donnelly 13:54
Nphet says normal life ‘some way off’ and vaccination unlikely to fully halt Covid-19 13:46
Health staff will not be offered choice of Covid-19 vaccine – HSE 13:43
Covid-19: Catholic bishops call on all to support vaccination programme 13:14
Family of woman who died from cervical cancer settles case 12:52