Government of cynical stunts is allergic to real democracy

‘Bring back Brian Cowen and Bertie!’ 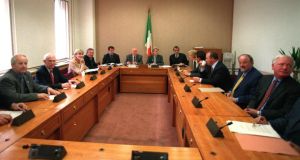 A joint Oireachtas committee in session – Government proposals are “pretend reforms, which will change some of the frolics of our system but nothing that matters.” PHOTOGRAPH: BRYAN O’BRIEN

We barely have a democracy here. Every four or five years we are offered the option of voting for one crowd or another crowd, both of whom will behave in more or less the same autocratic way in office and both of whom will implement almost exactly the same policies. The idea that we the people are self-governing is a mirage. This is not government of the people, by the people, for the people.

What is called our parliamentary democracy does not work either. Parliament is almost irrelevant. The government of the day decides everything and uses its majority in parliament to frustrate any meaningful accountability. Parliament (the Dáil) is unrepresentative. Few women, almost nobody from deprived communities. The people as a whole are alienated from politics – politics and politicians are regarded with derision.

None of the political parties proposes doing anything about this democratic deficit, in part because of simple indifference, in part because there is a vested interest in keeping the system as it is. There are pretended “reforms” but nothing to address the exclusion of the people from the big decisions; the collapse of parliamentary democracy; the unaccountability of government; and the unrepresentative character of the system.

Pretend reforms
You would have thought that because of the failure of our political system to avert the financial crisis there would be some initiative on changing the system radically. None at all. Instead we are offered, notably by the Government, pretend reforms that will change some of the frolics of our system but nothing that matters.

Worse than that, the main Government party, Fine Gael, seeks to capitalise on the public derision for politics by promising fewer politicians (presumably an unwitting commentary on themselves).

Our first constitution (that of 1922) provided a mechanism whereby citizens could instigate legislation and, where the Oireachtas failed to respond, submit the initiative to a referendum, with the outcome being binding on the Oireachtas.

Why can’t we, the people, have that again? Should the sovereign people not have had an entitlement, for instance, to a final say on the bank guarantee and on the surrender to the European Union and International Monetary Fund of what had remained of our sovereignty?

Enda Kenny has argued that the Seanad should be abolished because it failed to avert the financial crisis. More significantly, the Dáil failed to avert the financial crisis, in part because it was incapable of doing so and in part because the opposition led by Enda Kenny urged policies that would have made the crisis even worse.

But would it not be a good idea now to give the Dáil independent powers to oversee what the government of the day was doing, either by way of curtailing the whip system (as in the German and even the UK parliaments), or by way of an initiative operating in the Danish parliament whereby a “decisive minority” (say, 25 per cent of TDs) can insist on a full, independent inquiry into any matter, with full powers to command witnesses (including ministers) and documents?

Fine Gael and Labour won’t have that because they do not want accountable government. Instead they propose, limply, the government “engaging more with the Oireachtas” (note: not being controlled by the Oireachtas), extending Dáil sittings (to what purpose?) and consulting citizens (note: not allowing the sovereign citizens the final say). They also propose “reducing the guillotine” – ie reducing (not ending) the practice whereby the government can force legislation through parliament.

There is now the preposterous situation whereby five TDs are to be denied by the Government the entitlement to represent in parliament the people who elected them. These are the TDs expelled from the Fine Gael parliamentary party for insisting on honouring a promise they, Enda Kenny and their party made before the last election (ie not to legislate for abortion) – who are denied Dáil speaking rights.

Initiative devised in cynicism
It gets worse.

The Fine Gael initiative to abolish the Seanad was devised in cynicism (a stunt to distract attention from Enda Kenny’s incompetent Dáil performances in 2009) and executed in cynicism (the refusal to offer the electorate the option to reform the Seanad and the timing of the referendum before yet another attack on the vulnerable in Budget 2014). But a further cynical dimension has been added.

The Government is promising that if the people vote to retain the Seanad it will refuse to reform an institution it says is redundant in its present form. Of course it has to say that, however cynical it seems, because were it to concede that it would reform the Seanad if the people voted to retain it the choice would no longer be between the abolition of the Seanad and its retention in its present form but between abolition and a reformed Seanad.

This Government is even more cynical than the previous one.

Bring back Brian Cowen and Bertie!