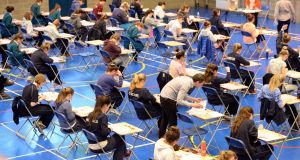 “It is of real importance to young students who have given five years of study that their papers would be examined dispassionately, accurately and professionally.’’ Photograph: Eric Luke

“It is currently only two days in Athlone, during which time they are to comprehend how the system works and how to put it into practice,’’ he said. “This is not enough training, especially for new examiners.’’

Mr O’Sullivan, a former teacher, said training should be extended to at least one full week, although he knew extra expense would be involved.

He said he had been involved in marking Leaving Cert papers during his teaching career.

“I have the utmost confidence in the marking system and the way in which the marking is administered by the Department of Education,’’ he added. “It is of real importance to young students who have given five years of study that their papers would be examined dispassionately, accurately and professionally.’’

Fine Gael Senator Maurice Cummins, Seanad leader, said Mr O’Sullivan had made a valid point and he would bring it to the Minister’s attention.

Meanwhile, the Immigrant Council of Ireland welcomed the passing of the committee stage of the Sex Offences Bill by the Seanad. Council anti-trafficking expert Denise Charlton said there remained the real prospect Ireland would join the international trend of targeting the buyers of sex.