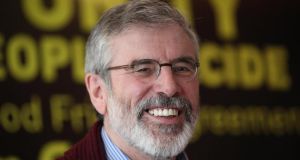 
Taoiseach Enda Kenny said he would discuss concerns about the peace process raised by the Sinn Féin leader when he meets senior Northern politicians.

Mr Kenny said he expected to meet First Minister Peter Robinson and Deputy First Minister Martin McGuinness “in the not-too distant future” and would be happy to discuss matters raised by Gerry Adams. “I expect the Executive will follow through diligently on this issue with the British government,” he added.

Mr Adams said he was concerned about decisions made by the British government which were seriously undermining the Belfast Agreement and the work of political institutions. “Once the institutions were stabilised and the big issues such as arms being put beyond use and policing were dealt with, the Government here, and include the previous government, took its eye off this most important issue,” he added.

Mr Adams said that while the agreement was 15 years old, there were still outstanding issues such as a Bill of rights, Acht na Gaeilge and an all-Ireland charter of rights. There was the British government’s refusal to act on commitments made regarding the killing of Pat Finucane and the “ongoing incarceration” of Marian Price and Martin Corey.

Mr Adams said the British government had reneged on an €18 billion commitment in 2006 to develop an economic peace dividend. “It has removed €4 billion from the block grant and is now imposing €1 billion of very significant cuts in welfare,” he added.

Mr Kenny said Mr Adams was well aware from his long experience in politics in the North that every time an issue was raised over the past 30 years, “the political process in Northern Ireland went to Downing Street and asked for another cheque to deal with whatever crisis had arisen”.

He would like to think, he said, that governments would honour their commitments relating to the agreement. Mr Adams said he totally dissented from the Taoiseach’s suggestion that every time a crisis occurred in the North the parties went to Downing Street. “This is not the case,’’ he added. “I am an Irish republican and I do not want any British government involvement in our affairs.”


Agreement
Fianna Fáil leader Micheál Martin said the Government should have done something to mark the agreement’s 15th anniversary. Mr Kenny said Fine Gael TD Joe McHugh had called a special meeting of the joint Oireachtas committee on its implementation. Mr Martin said he was referring to a Government event.

He said an attitude seemed to have taken root in both governments that the North was sorted and should be allowed to get on with things on its own.

Later, Mr Adams moved a Sinn Féin Private Members’ motion calling on the Government to work with the British government and all parties in re-energising the peace and political processes.

Replying to the motion, Tánaiste Eamon Gilmore said a Bill of rights for Northern Ireland, an Irish language act and a civic forum were not merely boxes to be ticked. “Each can make an important contribution to a fair and well-functioning society in Northern Ireland that this house has worked so long to achieve,” he added.

Some people, he said, had declared that the peace in the North was cold, but he did not share that view.

However, there were serious challenges ahead, said Mr Gilmore. These included sectarianism, disadvantage and paramilitary activities.