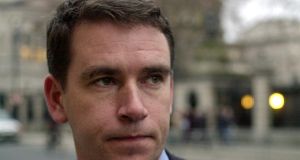 Plans to introduce legislation for mandatory collective bargaining were based on a “political whim” and had more to do with the Labour Party’s CV and policy wish list than economic necessity, a Fine Gael backbencher has claimed.

Mr Deasy claimed it was being introduced on a “political whim”. A trade union representative, he said, had “let the cat out of the bag” on the reasoning for the legislation and said that they could not let the centenary year of the 1913 lockout pass without some movement on mandatory collective bargaining.

The Fine Gael TD said “governing on the basis of marking a commemoration to Jim Larkin is absurd. We no longer have the luxury to legislate for political whims.

“This has more to do with political ideology than it does with an economic necessity,” he said.

Mr Deasy said the relationship between employee and employer was already covered extensively by Irish and European legislation.

His party colleague Joe O’Reilly, however, disagreed that mandatory collective bargaining would be a disincentive to foreign direct investment.

The Cavan-Monaghan TD said he believed that good employers with good HR policies and traditional good corporate structures “won’t necessarily be frightened by that, and outside and prevailing economic considerations and European law will still predominate”.