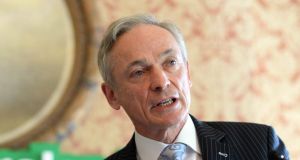 Mr Adams said “another US firm Pimco withdrew from the sales process in March last year after it was brought to Nama’s attention an attempt by a former Nama adviser Frank Cushnahan to solicit payments”.

The loan portfolio of 850 properties, the largest property sale in the history of Ireland with a book value of €5.6 billion, was subsequently sold to US fund Cerberus.

The controversy became public last week when Independent TD Mick Wallace claimed that following the sale,£7 million found in an Isle of Man bank account during an audit of Belfast law firm Tughans was “reportedly earmarked for a Northern Ireland politician or political party”.

Minister for Enterprise Richard Bruton refused calls by Mr Adams and Fianna Fáil leader Micheál Martin for a formal commission of investigation into the sales process.

He confirmed no fees, commissions or other remunerations are payable to former or current members of Nama’s board, executive and advisory committee.

But Mr Bruton insisted “Nama was found to have dealt with this in a proper way”.

He said: “There is an issue of fees in an account and due to be paid but those matters are being investigated by the Law Society and by the Northern Ireland Assembly.”

The Minister added: “We don’t need inquiries at every moment’s notice. We need an Oireachtas that can conduct questioning of the relevant people and that’s what will happen, and that’s the way we should proceed with this.”

He said Nama would appear before the Public Accounts Committee on Thursday and added the representative of the Comptroller & Auditor General’s office was “embedded” in Nama and “across” the deal.

He told the House during leaders’ questions that Pimco indicated during the sale process that its compliance staff uncovered a proposed fee arrangement.

When Nama was informed of this it said if Pimco did not withdraw, the agency would have to remove them from the process, the Minister said.

“The concern about the destination of a fee is an entirely different matter.”

Mr Bruton said the Minister was informed that the board of Nama had decided the company that had this compliance problem should not participate in the sale.

He said the successful bidder was asked to give an undertaking and gave assurances that no fee, commission or other remuneration is payable to any current or former member of the board, executive or advisory committee of Nama.

Mr Bruton said: “The fee arrangement did not involve Nama in any way. These involved the buyer and not the seller.”