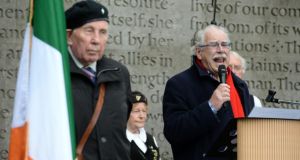 Preparations are underway for major centenary events as an alternative to the State’s plans to commemorate the 1916 Rising.

The separate proposals include a major parade and pageant on April 24th, 2016, the actual centenary of the 1916 Easter Monday Rising, which will involve actors including Stephen Rea, Fionnuala Flanagan and Adrian Dunbar and singer Sinéad O’Connor.

Artist Robert Ballagh, one of the organisers of the initiative “Reclaim the Vision of 1916”, said events would also include a National Graves re-dedication of the 1916 burial plot at Glasnevin cemetery.

Asked if there had been any contact with State authorities, the artist said “we are letting the State do their thing”. Mr Ballagh added: “I don’t think the State will be giving space to those who feel the vision of the Proclamation hasn’t been achieved.”

Mr Ballagh was speaking after addressing a 1916 commemoration yesterday afternoon at Arbour Hill in Dublin where 14 executed leaders of the Rising are buried, including the seven signatories of the Proclamation.

Paul Calleary, dressed in military uniform of the time, led the lowering of flags as the Last Post lament was played.Those gathered for the ceremony then sang the national anthem.

The event was organised by the 1915 to 1921 Club, set up in the late 1930s to remember the Rising. Barry Lyons of the club, described it as a non-political organisation established also to unite both sides in the Civil War. A wreath was laid by lifelong activist of the club Charlie Murphy.

Quoting from the Proclamation “the right of the people of Ireland to the ownership of Ireland”, Mr Ballagh asked “how stands that right with the sale of Corrib gas for a pittance to an international company”.

Referring to the quote about “cherishing all the children of the nation equally”, he cited a Barnardo’s report that one in six children are living below the poverty line. “This should concern us and inform the nature of how we should commemorate next year.”

Mr Ballagh told approximately 200 people attending the ceremony: “That is our task – to reclaim the vision of the Proclamation and the leaders of 1916.”

Speaking afterwards Helen Litton said yesterday was the 99th anniversary of the execution of Thomas Clarke, Pádraig Pearse and Thomas MacDonagh. They were shot on May 3rd, 1916. Her great uncle Edward (Ned) Doyle was shot on May 4th. Ms Litton said his direct descendants lived in England and did not get involved with any commemorations.