Aer Lingus will only be sold at ‘acceptable price’, says Minister for Transport 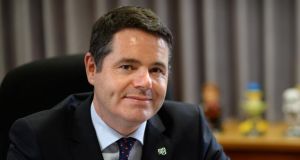 Aer Lingus will not be sold unless “an acceptable price’’ is secured, Minister for Transport Paschal Donohoe has told the Seanad.

Mr Donohoe said many legitimate concerns had been voiced about the International Airlines Group’s proposed offer, and the Government had outlined the details and clarification it needed in that regard.

“The interdepartmental group has continued discussions with IAG,’’ he said. “I have made it clear I wish to see this matter brought to a conclusion within a number of weeks.’’

He said connectivity, including connectivity with the regions, and employment, were exceptionally high among the criteria.

The Minister was replying to Independent Senator Sean D Barrett, who said he was concerned about announcements that the Government was edging closer to accepting the proposed takeover of Aer Lingus.

Mr Barrett said the takeover would be in the interests of British Airways and IAG, and it was known the Aer Lingus board wanted it to proceed.

“This does not mean it would be in the interest of wider society,’’ he added.

Mr Barrett said he would welcome a decision by BA to enter the Irish market, but not if the price was the acquisition of Aer Lingus

“This merger is not wanted, and Mr Walsh and company should be told to pack their bags and go,’’ the Senator said. “We want this independent airline.’’

Mr Barrett said part of his disquiet was that media leaks seemed to bypass parliament as if it did not matter.

“Some of the utterances have been dismissive of the deputies and Senators from north Dublin.”