Officials rule out British staff at Irish ports and airports

Both governments envisage an enhancement of existing systems of information exchange 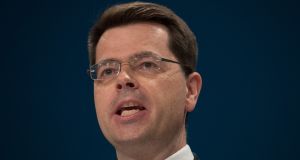 Northern Ireland Secretary James Brokenshire: “Our focus is to strengthen the external border of the Common Travel Area, building on the strong collaboration with our Irish partners.” Photograph: Matt Cardy/Getty Images

Any move to strengthen Ireland’s external border and deepen co-operation on combating illegal immigration after Brexit will not involve the deployment of British personnel to Irish ferry ports and airports, British and Irish official sources have told The Irish Times.

Both governments instead envisage an enhancement of existing systems of information exchange.

Northern Ireland Secretary James Brokenshire told the Guardian this week that, rather than introducing a “hard border” on the island of Ireland, strengthening Ireland’s external border could help to control immigration into both Britain and Ireland.

“We have put in place a range of measures to further combat illegal migration, working closely with the Irish Government. Our focus is to strengthen the external border of the Common Travel Area, building on the strong collaboration with our Irish partners,” Mr Brokenshire said.

Both British and Irish sources said they could not envisage any circumstances where British border police or immigration officials would be present at Irish ports.

Earlier this year, the Government introduced a statutory instrument to share information on all passengers entering the Common Travel Area before they start their journey. In 2014, the two governments introduced a single visa for the UK and Ireland for visitors from China and India.

It was designed to boost tourism but it was underpinned by greater data sharing, including the collection of biometrics as part of the Irish visa application process and new systems for the automated sharing and cross-checking of information with British authorities.

The Common Travel Area between the UK and Ireland has been in operation almost continuously since shortly after the foundation of the State but it has a different legal basis in each country. Britain’s 1971 Immigration Act says that Irish citizens arriving in the UK from Ireland do not require leave to enter.

After Brexit, Ireland would still be bound by the EU’s free movement commitment, which forbids most restrictions on immigration from other EU member states.

So even with stronger controls at Irish air and sea ports after Brexit, there would be nothing to stop EU nationals arriving in Ireland from travelling on to the UK.

Both governments believe, however, that few EU citizens would wish to work and live illegally in the UK if they can work legally elsewhere in Europe.