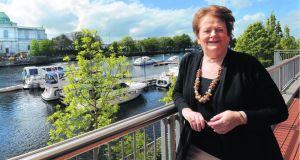 Former Fianna Fáil deputy leader Mary O’Rourke has proposed that her party should go into coalition with Fine Gael after the next election. Photograph: Dara Mac Dónaill / The Irish Times

Former Fianna Fáil deputy leader Mary O’Rourke has proposed a coalition between her party and Fine Gael after the next election.

Speaking at the William Carleton Summer School in Clogher, Co Tyrone, on the theme of How Differences Can Be Accommodated she said it was now time to forgo past differences.

“Here we are now in 2013 and here I am too, somebody who was in successive general elections elected on behalf of the Fianna Fáil Party and proudly representing my constituency of Longford/Westmeath.

“And yet and yet surely it is not too fanciful for me to put forward today as the theme of this Summer School that it is time that Fianna Fáil and Fine Gael would bridge the political divide between them and give serious thought to coming together in a political coalition come the next general election,” said Ms O’Rourke.

She said the Irish people had long forgotten the bone of contention between Fianna Fáil and Fine Gael was a treaty signed in London in far-off days.

“I know quite well that there are plenty who will dismiss my reflections here today as ‘Summer School Speak’ or even the wild rantings of somebody who has left the political system. It is very easy to dismiss my thoughts in that cavalier fashion,” she said.

Ms O’Rourke said she had been inspired to put forward her proposal by the generous thoughts and reflections in a speech delivered by her nephew, the late Brian Lenihan at Béal na mBláth.

“It is, to my mind one of the most generous non-tribal speeches ever made by anyone in either Fianna Fáil, Fine Gael or Labour,” she said.

Ms O’Rourke suggested it was now time now time to note the similarities and to forgo the differences.

“Is it not time now for us to think the unthinkable – to allow our minds to range over the possibilities which could emerge from the voices of the electorate in two to three years’ time. It is enough that the mind is engaged and that is all I ask for. To engage the mind on this possibility and to reflect on the courage and vision of those who have gone before us,” she said.