Northern Ireland: The story of 18 seats won and lost

News from each of the 18 constituencies, with all seats illed

The results of the UK elections for the 4 Belfast constituencies were counted in Kings Hall overnight. Northern Ireland Editor Gerry Moriarty reports on those counts and the overall situation in the North. Video: Bryan O'Brien 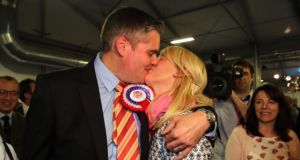 There was shock among Sinn Féin supporters following the Fermanagh South Tyrone count.

Ms Gildernew won by just four votes in 2010 - a margin reduced to a solitary ballot paper after review by the electoral courts.

In something of an upset, Rev Willie McCrea lost his seat to the UUP's Danny Kinahan.

Mr McCrea said it has been an honour and privilege to serve the people of South Antrim over the last decade and congratulated Kinahan.

"I do believe South Antrim will go from strength to strength," he said. "I hand the mantel over to Danny," he added and says he leaves the constituency with "dignity, integrity and great pride".

The Democratic Unionist Party (DUP) has regained the seat for East Belfast after its candidate Gavin Robinson saw off the challenge of incumbent Naomi Long of the Alliance Party.

From the beginning, it was anticipated that this would be one of the most hotly-contested constituencies as the DUP looked to wrest the seat back from its rivals following a humiliating defeat in 2010.

The odds seemed stacked in Robinson’s favour given the cross-party pact the DUP had engaged in prior to the election, which saw other unionist candidates stand aside to afford him a clear run at victory.

The first result of the night is a predictable one, with Jeffrey Donaldson holding on to his seat for the DUP. Donaldson tops the poll with 47.9% of the vote, down slightly on the 49.8% claimed in 2010.

In 2010 Jeffrey Donaldson faced the main challenge from Daphne Trimble who was representing the disastrous Ulster Unionists-Tory link-up called UCUNF (Ulster Conservatives and Unionists – New Force), but he won by more than 10,000 votes.

The SDLP's Mark Durkan has recorded a stunning victory in Derry to finish just over 6,000 votes ahead of second placed Sinn Fein candidate Gearoid O'hEara. Durkan topped the poll with 47.9%.

In the lowest turnout in the constituency since 1983, Durkan polled 17,725 votes. O'hEara polled 11,679. Durkan increased his majority over Sinn Fein from the last election from 4,824 to 6,046 despite a four percent drop in the percentage poll.

However, the 2011 Assembly voting in Derry was much closer, with the SDLP returning three MLAs with 13,699 votes and Sinn Féin two with 13,200 votes.

Ian Paisley has retained his North Antrim seat in style.

It was the first general election he had contested without the help of his dad on the hustings, the late Ian Senior, who passed away last year.

The turnout in North Antrim was slightly down than in 2010 but Ian Paisley arrived at the count centre in Ballymena's Seven Towers Leisure Centre to cheers from supporters.

He was in bouyant mood and said he was confident of success ahead of having to show his passport to prove his identity and get inside the count hall.

The relaxed MP, who was accompanied by his wife Fiona and family members, even took time out to pose for 'selfies' with a local press photographer.

He won by a landslide with 18,107 votes which was well ahead of second placed Timothy Gaston of the TUV on 6,561.

Mr Paisley said as a "Christian" he thanked God for his victory.

He said the DUP could have a say in determining the next UK government.

No surprises in the West Tyrone constituency where incumbent SF MP Pat Doherty topped the poll.

Speaking afterwards, he said the party would be moving forward with its "project for reunification".

Shouts of "Never, Never” were heard from Doherty's political opponents, while some of his supporters shouted: “Tiocfaidh ár lá.”

Doherty took almost 50 per cent of the vote in 2010, so it was no surprise when he was re-elected tonight.

David Simpson of the Democratic Unionist Party has retained his seat in the Upper Bann constituency with 15,430.

Jo-Anne Dobson of the Ulster Unionist Party was a close second.

Mr Simpson said the campaign had "slumped to the gutter" and the abuse his family had suffered over past seven weeks was "despicable". He said it hurts when the DUP has a victory.

Ms Dobson said she was a proud unionist and said she and her team can be immensely proud of what they had achieved. She said they had run a purely positive campaign.

Sammy Wilson, who is also an MLA for the constituency, has been re-elected with 36.1% of the vote.

Mr Wilson first won the seat in 2005, taking it from Roy Beggs snr who held it for 22 years for the Ulster Unionists. Roy jnr, with the Beggs brand name, took second place.

Lady Sylvia Hermon has been re-elected in the constituency.

In 2010 the DUP didn’t bother competing against Lady Sylvia Hermon who is viewed as minor royalty in this constituency.

This time the party sent North Down Assembly member Alex Easton to try to oust her from the House of Commons. The party, with 44 per cent of the vote, holds three of the six Assembly seats in North Down. However Lady Hermon managed to hold on.

Paul Maskey has topped the poll with 54.2% of the vote.

This is Gerry Adam’s old seat – before he decided he wanted to become a TD. Maskey strolled home in the 2011 byelection with a majority of more than 13,000 votes.

He said Sinn Féin will be “wrapping on 10 Downing Street’s door” regardless of the government demanding protection of social welfare payments.

Gregory Campbell has held his seat, with 14,663 votes.

The Cannabis Is Safer Than Alcohol candidate, Neil Paine said he was delighted with the 527 votes he polled in a constituency which contains a high student population.

However, it wasn't enough to threaten the outgoing DUP candidate who comfortably retained his seat, almost 8,000 more than second placed Caoimhe Archibald of Sinn Fein.

Paine said he was also pleased that he polled 105 votes more than the Northern Ireland Conservative's Liz St.Clair-Legge who finished last of the seven candidates in this DUP stronghold.

Nigel Doods has held the seat with 47% of the vote.

An electoral pact with the Ulster Unionists boosted the DUP’s chances of seeing their deputy leader retain North Belfast.

Sinn Féin has been seriously chasing this seat for more that a decade. There have been demographic shifts, with nationalists now narrowly in the majority here. For the past three Westminster elections Gerry Kelly has been getting closer and closer to Dodds: he was 6,400 votes behind in 2001, just 2,200 votes shy of him in 2010, but Dodds has increased his lead again - winning this time by more than 5,000 votes.

At the last general election in 2010 McDonnell had a 6,000 majority but Sinn Féin wasn’t in the ring.

Francie Molloy has held his seat.

William McCrea’s son, Ian, a DUP MLA, was the main challenge to the Sinn Féin MP, but Molloy, who took 46.9 per cent of the vote at a 2013 byelection in the largely rural constituency, was never in any danger of losing his seat.

Martin McGuinness won the Westminster seat for Sinn Féin in 1997 and resigned three years after the 2010 election to concentrate on being Stormont’s deputy First Minister.

Mickey Brady has secured the seat in the Newry/Armagh constituency.

Mr Brady said: "We have won with an increased vote. I am replacing Conor Murphy, that's an honour."

Mr Kennedy said he regretted that the voice of Newry/Armagh would not be heard.

Mr McNulty said he was very disappointed but said it was a tremendous learning experience for him..

The SDLP's Margaret Ritchie has retained her South Down seat.

The DUP's Jim Wells ended a campaign dominated with controversy in fourth place behind the Ulster Unionists.

The DUP and former Northern Ireland health minister Jim Wells cut a forlorn figure as he saw his vote decline for the second election in a row.

Jim Shannon was re-elected in Strangford, with more than 15,000 votes.

In 2010, Jim Shannon claimed 45.9 per cent of the vote, seeing off a challenge from the now Ulster Unionist Party leader Mike Nesbitt, who stood at the time for the UUP-Tory project UCUNF (Ulster Conservatives and Unionists – New Force), who took 27.8 per cent.