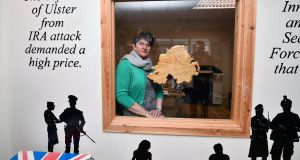 There’s a bridge Arlene Foster must pass near Maguiresbridge, Co Fermanagh, in order to get home that recently had the words “Arlene out” scrawled across it in red paint.

But the chances of the embattled Democratic Unionist leader crashing out of politics in her home turf of Fermanagh and South Tyrone next month looks highly unlikely.

While her leadership and decision-making have come under serious scrutiny amid the botched green energy scandal, the former first minister is relatively unscathed locally. But after remarks on the Irish language and comparing Sinn Féin to “crocodiles”, her crown has most certainly slipped.

Foster had a spectacular win the last time, picking up 8,801 first-preference votes securing her place at Stormont and that of her running mate Lord Maurice Morrow. Her core support still exists but so too does the animosity that she sparks in some areas of Fermanagh.

Indeed, a member of her team who has been knocking doors almost every day since the election was called quipped: “The people who hated us before hate us even more now.”

Morrow has a low profile in Fermanagh, preferring to focus on South Tyrone, which may well be to his detriment on March 2nd. The challenge for Foster and her party is will she secure enough votes this time to help Morrow over the line and hold on to two seats for the DUP.

There are only five seats in the constituency this time and 12 candidates, but Sinn Féin have little to fear. The party has learned its lesson from the last time, running three candidates instead of four in this election in a bid to claw back the seat it lost to the SDLP’s Richie McPhillips last year.

The insurance broker from Lisnaskea faces the fight of his political life if he is to retain the seat given Sinn Féin’s considerable support in South Fermanagh where he is based. He is a capable candidate and spent his eight months at Stormont fighting for rural issues, but he knows it will be an uphill battle.

Sinn Féin’s sitting MLAs Michelle Gildernew, a former MP for the area, and Sean Lynch, a former IRA commander, will give him a run for his money. They will likely retain their seats, though it did take seven recounts for Lynch to meet the quota last time. Gildernew, on the other hand, is well liked, even by unionists.

Jemma Dolan, the party’s third candidate, may well just squeeze in. This is the 26-year-old from Belleek’s first election but how close she comes to securing a seat will likely rest on how much of a bounce she gets from transfers.

There’s no love lost between Sinn Féin and the SDLP in this constituency which indicates that there will be few transfers between the two parties. That may bode well for the Ulster Unionist Party’s Rosemary Barton who could benefit from having worked closely together with McPhillips in official opposition before Stormont collapsed.

That said, the remarks by UUP leader Mike Nesbitt on transferring to the SDLP appear to have irked some of his members in rural parts of Fermanagh which makes up the core membership of the party. Even Barton, a former teacher, has since instructed voters here to vote for pro-union candidates before nationalists.

Alex Elliott, who is standing for the Traditional Unionist Voice, stands to gain as people fed up of Stormont and the controversy surrounding the renewable heat incentive get behind him.

Despite pounding the streets on issues relating to mental health, the environment, the economy and education it is unlikely that any of them will win a seat. While there is a growing interest in alternative parties in Fermanagh and South Tyrone it will still come down to orange and green.

For now the question is who loses out on a place at Stormont: a nationalist or a unionist?

It looks like Foster will retain her seat and while Elliott will be biting at the DUP’s heels as he tries to cause upset, Morrow should scrape in to secure a second seat for the party.

Sinn Fein’s Gildernew and Lynch will likely pick up the next two seats but it could be a dog fight for the third seat between Dolan, McPhillips and Barton.

UUP sources say it “will be tight” for Barton to hold on, particularly as it took six recounts for her to get selected last year, which means for McPhillips and Dolan it will all be about the transfers.