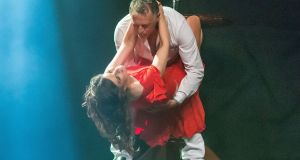 Sinn Féin candidate Kathleen Funchion in the groove with partner Eddie Wall during Strictly Let’s Dance Callan, which was held at the same time as the count for the Carlow/Kilkenny election seats. Funchion went on to take a Dáil seat but not the dance title. Photograph: Pat Moore

Some of the crowd at the count in Carlow-Kilkenny thought Sinn Féin’s Kathleen Funchion was being a bit presumptuous when she sashayed into the Cillin Hill centre to hear the early results, dressed to the nines and already looking like a winner.

What they didn’t know was that Kathleen, who would later be elected to the Dáil at her fourth attempt, had come straight from the Lyrath Hotel next door, where final rehearsals for a charity dance competition were taking place.

“I knew by the look on their faces when I arrived that they were saying ‘this one thinks she’s already elected’,” says Kathleen.

“I had to keep explaining I had my hair and make-up done for the contest.”

The new TD had agreed to take part in “Strictly Let’s Dance, Callan” before the election date was announced and didn’t want to let down the organisers.

Not least because she had been in training for eight weeks before the big night, fitting in ballroom dancing classes between canvassing duties.

So Kathleen nipped across in the afternoon to see how matters were progressing, before returning to trip the light fantastic with her partner for the evening, local man Eddie Wall.

Wearing a crimson dress borrowed from competition organiser Rachel Ellard, the soon to be deputy Funchion took to the stage and performed a Latin combination of the Tango and Cha-cha-cha.

Five places in the final dance-off were up for grabs, but Funchion and Wall failed to make it through.

Fortunately for Kathleen, the same result wasn’t repeated next door, where five seats were on offer.

“It was just as well we didn’t quite make it, because I don’t know how I would have been able to go back and dance when result was due to be announced” she said.

Instead, she did a quick change and got back in time to hear she had made it through in third place, on the 10th count.

Elevation Once Again for the jubilant Sinn Féin TD.

When Fine Gael’s post-election parliamentary party meeting finally staggered to a close after nearly seven hours, the parched Blueshirts took themselves off for a drink.

Many of the new arrivals went across the road to the Cellar Bar in the Merrion Hotel, while the Taoiseach channelled his inner hipster and repaired to a popular craft beer emporium in the company of the new deputy for Dublin North West, Noel Rock.

Noel’s win was a rare success story for Fine Gael. The 28-year-old councillor for the Ballymun area defied his party’s poor showing by becoming their first TD in the constituency for over 20 years.

Enda wanted to toast his victory, so Noel brought him to Galway Bay Brewery’s Against the Grain on Wexford Street.

It’s co-owned by Rock’s friend Jason O’Connell and is one of his rapidly growing chain of pubs.

The regular clientele were surprised to see him, but in an ironic way.

The Taoiseach will have been relieved to see them – the worry that Noel was taking him to a pub for Dublin aul fellas with new hips must have been terrible.

The Hipstenda was joined by Leo Varadkar, Simon Harris and Kildare TD Martin Heydon, along with a sizable contingent from Rock’s youthful campaign team.

We hear that the Hipstenda drank a Galway Bay stout from the vast array of craft beers on offer, but we can’t say whether it was the Stormy Port porter or Buried at Sea stout.

Afterwards, most of the group ended up in Copper Face Jacks.

“The Taoiseach declined to go,” says Noel. As the party’s youngest TD, he will nominate Enda Kenny for Taoiseach when the Dáil resumes on Thursday.

Leinster House was a hive of activity as vanquished TDs cleared their offices and moved off the premises and the next batch moved in.

There is no time for sentiment; the changeover is swift. It was also a difficult time for political staffers, many of whom will lose their jobs alongside the TDs for whom they worked.

The losses on the Labour and Fine Gael side are particularly heavy. Meanwhile, the permanent staff (ushers, catering team, civil servants — those unsung heroes who actually run the place) are frantically trying to learn the names of all the new arrivals.

Then there’s the tricky problem of remembering who to congratulate and with whom to commiserate when you meet them in the corridor. It can be very confusing.

One mortified Oireachtas employee told us how she went into the bar and saw a familiar face.

“Welcome back, deputy. Good to see you again!” she exclaimed, only for the politician to tell her he wasn’t, in fact, returning to the Dáil.

“Oh my God, I’m awful sorry,” she cried to a bemused Pat Rabbitte. “I thought you were Bernard Durkan. ” Ouch!

Time for some straight talk about the political situation we now find ourselves in. Thankfully, we have the venerable John Horgan, former Labour senator, TD and MEP, to explain where Labour stands now.

Here’s the best bit, in case you missed it in yesterday’s Irish Times:

“This time around, Labour was, to put it mildly, dangerously insensitive to this shift in the public mood, but it is in a better position to benefit from it than many of the other parties.

This is because the centre parties are essentially wedded to tax cuts and because some smaller, self-described ‘parties of the Left’, and some of the Independents, are millenarist or Poujadist agglomerations.”

We are not dealing with muck here. But all the same, dem Poujadist agglomerations is a terrible scourge.

I knew a man who got them and he couldn’t sit down for a month.

Thank God the seats in the Dáil are padded.