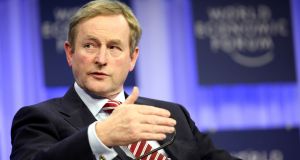 Enda Kenny: suddenly, Enda has come over all coy. He had been happy to state his measure. Now, he doesn’t know how to say “when”. In Leinster House, people are puzzled. Photograph: Bloomberg

Once there was clarity.

Not so long ago, there was a definite line.

It wasn’t in the sand either, because sand is a discredited commodity where politicians are concerned.

The Minister for Finance tried to blur it on Friday, but in this particular matter, he doesn’t count.

Whose line is it anyway?

It belongs to Enda Kenny.

And until the start of this week, the Taoiseach was standing over it. No wavering.

The general election will take place next year, he firmly informed anyone who asked – 2016, going forward, and don’t mind what the others might say.

But suddenly, Enda has come over all coy. He had been happy to state his measure. Now, he doesn’t know how to say “when”. In Leinster House, people are puzzled.

We should know better than second guess him. But this sudden retreat from a position of absolute certainty to blatant ambiguity has set off a wave of fevered speculation in Kildare Street. The sensible course of action would be to ignore Enda. What will be, will be, and all that.

But we can’t. As much as it might irritate the public, there’s no point in saying otherwise.

That set the cocks crowing.

And on Tuesday, when the Dáil began a new week, it didn’t take long before there was an attempt in the chamber to winkle a date out of him.

They have a strange concept of time in Leinster House. During questions to the Taoiseach, for example, much of the session was taken up with a scheduled discussion on his visit to America. No, not the most recent one, but the trip he took on the nation’s behalf back in March.

Not much light from the Taoiseach on these issues, and what he had to say was delivered to a very sparse audience of deputies.

The only time Enda seemed properly engaged was during his reply on Longboat Quay situation. It gave him an opportunity to hold forth on shoddy building practices during the Celtic Tiger period.

A number of defective schemes have already come to light, he noted, adding that they probably wouldn’t be the last.

He should have been addressing his words to McDonald, but the Taoiseach couldn’t resist swivelling on his heels and jabbing his pen in the direction of Micheál Martin.

“And that’s all a legacy of this party over here,” he boomed.

A line delivered in perfect keeping with Fine Gael’s election strategy, which, according to weekend newspaper reports, will go in hard on Fianna Fáil’s handling of the economy in the run-up to the financial crash.

And so to the Order of Business, when the house agrees its work timetable.

Two issues were top of the pile: that the Dáil agree to mount a defence to the legal challenge taken against the Committee of Procedure and Privileges by businessman Denis O’Brien and to accede to a request from the chairman of the banking inquiry for more time to complete their report. Ciarán Lynch wants an extra eight weeks, with a delivery date at the end of January.

Under the law, the inquiry terminates when a general election is called. If it happens in November, before the committee reports, their work will have come to nowt.

“Given all the speculation and commentary, and the refusal of the Taoiseach to rule out a November election, why would we extend the remit of the banking inquiry unless we are certain the Dáil will be here in January?” asked Micheál.

He wasn’t trying to hop the ball or cause mischief. He was asking purely in the interest of “clarity”.

“The position is that if the Dáil collapses or fails and there is a general election, that inquiry collapses. It cannot be restarted or reinitiated under a new Dáil.”

Enda was happy to grab the wrong end of the stick.

“Sure, that’s not the debate you’re looking for at all,” he declared.

“The House is not going to collapse. Deputy Martin needn’t worry.”

The Fianna Fáil leader did a double take.

“What does that mean?”

“The House isn’t going to collapse.”

But Enda was happy with his choice of words. There would be no collapsing on his watch.

Which is not the same as dissolving.

So the Dáil voted and decided to give Ciarán Lynch and his compadres more time.

Then Fianna Fáil came back and demanded a date. No big deal, just some clarity.

Barry Cowen waded in behind his boss. “It’s a very simple matter,” he said to Enda.

The Taoiseach sat back and smiled inscrutably.

He will decide when. And, at the moment, he seems to be enjoying his power.

He’s like a little boy poking a twig around the edge of a spider’s web, teasing and enticing it out again and again.

It’s slow torture for the politicians and media.