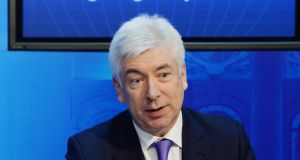 Alex White: in favour of finishing off the work done by the constitutional convention. Photograph: Alan Betson

A Labour Party Minister wants more referendums to be held following the two polls due to take place in May, even though Taoiseach Enda Kenny is against further referendums this year.

The Coalition has committed to holding two referendums in the spring, one on same sex marriage and one on reducing the age of presidential candidates from 35 to 21.

Mr Kenny has ruled out holding further referendums this year on removing the offence of blasphemy from the Constitution and reducing the voting age from 18 to 16. The Taoiseach has said people “may well switch off”.

However, Alex White, the Minister for Communications, Energy and Natural Resources, said he believed these two referendums, proposed on foot of recommendations from the constitutional convention, should be held, possibly in the second half of this year.

While the Coalition has not formally decided that no other referendums should be held in its lifetime, sources have indicated it is extremely unlikely other questions will be put to the people because of the proximity of the general election, due in spring 2016. Some in Labour have expressed concern that the blasphemy poll may not be held at all.

No date for blasphemy

Mr White said the referendums should be “on the agenda for the autumn”, but he would not “put them in any particular hierarchy” and say which, if any, should be given preference.

“I still personally think that in the autumn we should look again at the prospects of finishing off as best we can the work that was set out by the constitutional convention,” Mr White said.

“That’s my view, I have expressed that view and the Government has made no decision on it yet. I wouldn’t be critical of the Taoiseach or anybody else in saying: ‘Look, we are not going to have a lot of time.’

“I think the Taoiseach has expressed a view, which is not an unreasonable one, that the timelines and the time available between now and March [2016], which is when the general election is, that the windows are relatively narrow.”