‘It would be historic to have a first female Ceann Comhairle . . . as part of a reform agenda’ 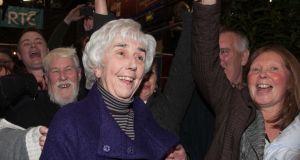 A file image of Independent candidate Maureen O’ Sullivan seen at the count centre in the RDS in Dublin last month. Photograph: Collins

Independent TD Maureen O’Sullivan has indicated she will stand for the position of Ceann Comhairle.

Ms O’Sullivan told The Irish Times she is to consult with her supporters on Monday night about the role.

However, she claimed it “would not be right” to stop her name going forward for the election.

She said: “It would be very historic to have a first female Ceann Comhairle. It would have to be part of an overall reform agenda, she said.

“A lot of things need to change within the Dáil itself. Obviously as an Independent there should be more of a level playing field. That would also include Government backbench TDs.

“I would like to see a different Dáil emerging now that we have a chance.”

Ms O’Sullivan said she has received a positive response to her bid for the role from a number of Independent TDs.

Former Fine Gael TD Denis Naughten said she has his support and said he will only out his own name forward for the position if Ms O’Sullivan does not.

Fianna Fail will choose its candidate on Monday. So far, five TDs have put their name forward for the position.

Nominations of candidates for the role will have to be received by the clerk of the Dáil not later than 6pm on March 9th - the day before the new Dáil meets.

Nomination forms will have to have the supporting signatures of at least seven other TDs. Deputies can only nominate one candidate.