Negotiations taking place before Dáil votes for Taoiseach on Thursday 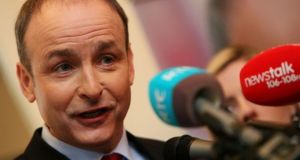 Micheál Martin will meet members of the Independent Alliance at noon on Monday as he and Enda Kenny seek support from TDs before the Dáil votes for Taoiseach on Thursday.

It is expected the Fianna Fáil leader will fail to bridge the gap of 13 votes between himself and Mr Kenny, who is predicted to get the backing of 57 TDs compared with Mr Martin’s 44.

On Monday morning Fianna Fáil health spokesman Bily Kelleher said the party will spend the next few days trying to garner as much support as possible.

Mr Kelleher said many Independent TDs are unlikely to support either candidate for Taoiseach. He told Morning Ireland that Fianna Fáil will engage with these Independents “in a more definitive way” after the vote on Thursday.

Independent Alliance member Finian McGrath said the group of six TDs will put its “charter for change”, outlining its policies in health and other social areas, to Mr Martin at the meeting on Monday.

The alliance also presented the charter to Mr Kenny on Friday and were told that Fine Gael would go through it section by section and come back with a detailed response, Mr McGrath said.

He added that the group wants to talk to leaders who have the backing of their own party and indicated that there are doubts over Mr Kenny’s authority. This view was also expressed by fellow Independent Alliance member Shane Ross in his newspaper column on Sunday.

Coronavirus: Two more deaths brings total toll in State to 1,748 19:38
Eleven publicans found to be in breach of Covid-19 measures 19:10
Ministerial profiles: Who’s who 19:09
Hearing into Ian Bailey’s proposed extradition to France opens at High Court 18:59
State staff will have to use unpaid time off to isolate if overseas 18:45