Peter Robinson believes someone should try to take on Sylvia Hermon 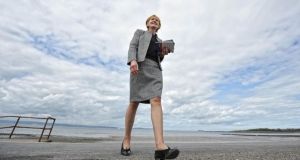 Lady Sylvia Hermon: her vote in the House of Commons, if she is re-elected, could yield a high price on the electoral market place. Photograph: Charles McQuillan/Pacemaker

Last Wednesday Lady Sylvia Hermon got the galvanising kick-start she needed for the next few weeks of hard canvassing in pleasant seaside towns such as Holywood and Bangor. It had her out on the streets postering and canvassing, shod in a strong pair of brogues, and so it will continue until polling day on May 7th.

She had just learned, as she suspected would happen, that DUP leader and First Minister Peter Robinson had decided that one of his North Down Assembly members, Alex Easton, must try to oust her from the House of Commons.

In 2010 the DUP didn’t bother competing against Lady Hermon who, with her liberal unionist pedigree and stature as wife of the late RUC chief constable Sir Jack Hermon, is viewed as minor royalty in this constituency.

Instead, it was left to Ian Parsley of that distinctly odd amalgam of the Tories and the Ulster Unionists (Ulster Conservatives and Unionists – New Force – UCUNF) to attempt to unseat Lady Hermon. Parsley soon got his comeuppance. He polled 6,800 votes against Lady Hermon’s 21,200 votes.

The Conservatives alone this time are putting up a candidate, Mark Brotherston from Bangor, which probably illustrates the triumph of optimism over good sense.

The Ulster Unionist Party, after first nominating local councillor Carl McClean, then decided to withdraw him from the election. UUP leader Mike Nesbitt, when explaining this volte-face in late February, said: “In our view she [Lady Hermon] is not only a suitable choice for Ulster Unionists, she is still an Ulster Unionist in spirit, and on that basis it makes no sense to stand a candidate against her.” 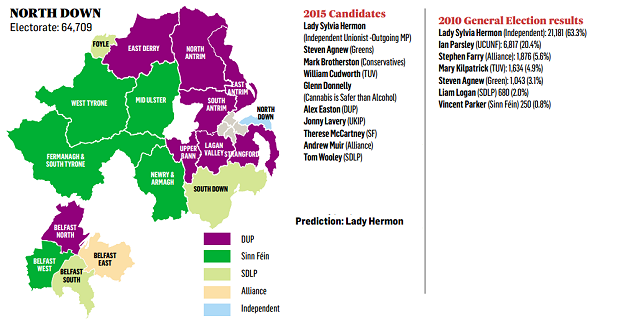 That was a reference to how Lady Hermon severed her UUP connections in 2010 in protest at the ill-fated UCUNF experiment. “I can’t see myself standing under a Conservative banner,” she said rather acidly at the time. That meant for the first time the UUP had no representation in the House of Commons – which remains the case unless they can restore some lost fortune elsewhere.

“It was very kind of Mike to make that courtesy call to me, but I have greatly enjoyed the freedom of being an independent. I can vote with my conscience, I can vote with what I believe to be in the best interests of North Down in particular and Northern Ireland in general and I have absolutely no intention of joining any political party again.”

The eight or nine MPs the DUP will probably return to Westminster could be crucial in propping up a Tory or Labour government in the event of a hung parliament. However, depending on the arithmetic, Lady Hermon’s vote, if she is re-elected, might also yield a high price on the electoral market place.

So, David Cameron or Ed Miliband? Just because she rejected the “Conservative banner” in 2010 doesn’t mean she would plump for Miliband. She is keeping her options open. “It would be very foolish to commit to one or other of these parties this side of May 7th.”

On the face of it, Easton has more than a reasonable chance of success. He says he is “quietly confident” of causing an upset. Still, it would be a major upset if the nice people of North Down proved disloyal to Lady Hermon. It is a pretty affluent constituency, although it has some deprived loyalist pockets as well. Sinn Féin and the SDLP are each running a candidate but nationalism, with about 4 per cent of the vote, has no purchase in North Down.

The Greens have their only MLA here in Steven Agnew, who is hoping for a good vote. Also competing are Alliance, Ukip, Traditional Unionist Voice, a Conservative and a Cannabis is Safer than Alcohol candidate, Glenn Donnelly. All of them, including Easton, will have their work cut out to put pressure on Lady Hermon.