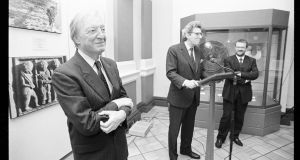 Irish diplomats were warned by a member of Margaret Thatcher’s cabinet about blanket eavesdropping on their communications with Dublin during the talks that led to the Anglo-Irish Agreement.

Arts minister Lord Gowrie, who was a member of the British cabinet subcommittee that handled the agreement negotiations, gave the warning to Irish diplomat Richard Ryan, who was based at the London Embassy at the time.

Lord Gowrie, whose family had sold the Castlemartin estate in Co Kildare to Tony O’Reilly, was appointed to the cabinet subcommittee because of his contacts on both sides of the Irish Sea.

He had lunch with Ryan on March 27th, 1985. In his report of the meeting, the diplomat said Lord Gowrie felt honoured that the prime minister had asked him to be a member of the subcommittee.

“He has thought for some time that a certain suspicion attaches to him on Irish affairs and, while delighted with the invitation from her, he feels he must proceed with great care in order not to compromise in any way the objectivity that is essential to the job,” wrote Ryan.

“He asked that the ambassador and I should be very aware of blanket eavesdropping in our communications with Dublin and that we should not allow our special relationship with him (which is known to the prime minister, and may well be one of the reasons for him being brought in at this time) to lead to difficulties.”

Lord Gowrie mentioned that Ryan had caused some difficulty for Northern Ireland minister Richard Needham the previous year when a coded telex came back to the government via Cheltenham. He asked the Irish side to do their reporting in a secure way for his sake.

Ryan’s message and a number of other sensitive ones were sent to Dublin via courier during the following months to avoid eavesdropping.

Lord Gowrie told Ryan that he hoped to have a clear field of fire with Thatcher over the coming months and hoped that could be of some mutual use.

“He thinks in an objective way that he has probably now climbed as high as he can ever go and feels the time may have come for him to make a throw to get the prime minister to do the right thing,” wrote Ryan.

Lord Gowrie insisted he was not “an Irish mole” but, rather, “a reasonably well-informed and well-disposed Brit who may be in the way of assisting us as long as we understand the need for a light touch.”

On May 8th, Ryan reported back on another conversation with Lord Gowrie in which the British minister again asked for a faithful promise that what he had to say would not leak on the Irish side, because he would be in serious trouble with Thatcher if it did.

Lord Gowrie said he understood there were serious problems between the two sides at that stage but he added that cabinet secretary Robert Armstrong was doing what he could to sort them out.

He then went on to say that a much more major difficulty had arisen because of a threat by the most senior member of the British judiciary, Lord Chief Justice Lowry, to resign in opposition to a draft deal.

“This, said Gowrie, had has a powerful effect on the prime minister and on ministers other than Sir Geoffrey Howe. Douglas Hurd, he said, has backed into a corner and is waiting to see what will happen: he is not going to take a stand on his own.

“Gowrie described the prime minister’s response as, curiously, one of personal relief: Lowry’s position confirms her own unionist instinct which has for some time been bottled up by Armstrong, Howe and others on the British side and by the taoiseach on our side.”

Sir Michael expressed his commitment to the Anglo-Irish talks and said Lowry was far too political to occupy the position of lord chief justice. “Lowry, he said, is a straight unionist and he is playing a political card game, knowing he has some aces, and knowing that the government knows he has some aces.”

Sir Michael expressed his “extraordinary respect” for Garret FitzGerald and said he was not so much an ally as a leader in the fight against the IRA.

He also said he had considered his Irish counterpart Peter Sutherland, who had recently taken up the post of Ireland’s EU commissioner, “to be an exceptional character in every regard; Sutherland had been his best friend in the Republic”.

Sir Michael told Ryan he had met Sutherland’s successor, John Rogers, earlier in the week and had been impressed with him.