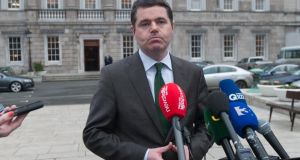 Minister for Transport Paschal Donohoe: he emphasised that the Government’s decision would be based on wider considerations than the price. Photograph: Gareth Chaney Collins

There are strong indications that the Government will not sell the State’s 25.1 per cent stake in Aer Lingus to International Consolidated Airlines Group (IAG), which is proposing to pay €1.36 billion for the company.

IAG chief executive Willie Walsh is believed to be meeting Government representatives today to discuss his company’s proposed €2.55 a share bid for Aer Lingus, which has the conditional support of the airline’s board.

While Minister for Transport Paschal Donohoe gave details of an expert group appointed to advise on the proposed sale, he emphasised that the Government’s decision would be based on wider considerations than the price.

Taoiseach Enda Kenny said in the Dáil that issues like connectivity and jobs would have to be fully taken into account.

A number of Labour TDs have already publicly expressed outright opposition to the proposed sale and there is no appetite for it in Fine Gael either. Any sale of the State’s shareholding would have to be approved by the Dáil as well as the Government.

Politicians and lobby groups fear that the deal could result in Aer Lingus losing valuable slots – landing rights – at Heathrow Airport, seen as vital to maintaining the Republic’s links with export and tourism markets, to IAG subsidiary British Airways.

However, an IAG spokeswoman said that Aer Lingus would “continue to own all its Heathrow slots” should the deal go through. She added that Spanish airline Iberia was not forced to hand over its rights at the London gateway to BA when the two merged in 2010 to form the group.

She also indicated that predictions that 1,000 jobs would be lost at Aer Lingus were wide of the mark. These estimates are based on the fact that 4,000 staff at Iberia were laid off following the merger.

Mr Donohoe briefed the Cabinet yesterday on the approaches that have been made to the board of Aer Lingus by IAG.

He said the process involving a potential sale of Aer Lingus was in the early stages and it was important to note that no formal offer has yet been made.

The Minister added that a group chaired by his department and comprising representatives from the Departments of Finance, Public Expenditure and Reform and from NewEra, and supported by external advisers, was examining the issues around a potential offer for the State’s shareholding in the company.

The Government has appointed IBI Corporate Finance, part of Bank of Ireland, to advise it. NewEra, the agency responsible for State assets, is in the process of finalising the appointment of its advisers. It is understood that it intends hiring both IBI and commercial law form McCann Fitzgerald, but it would not comment.

The Minister’s emphasis on the importance of issues like connectivity, jobs and competition echoed concerns that have been expressed by a number of Labour TDs and by Jack O’Connor, the general secretary of the country’s biggest union.

The chairman of the Labour parliamentary party Jack Wall has also expressed strong reservations about the sale of the State share.