Peter Burke expected to be elected, Willie Penrose or James Bannon to miss out 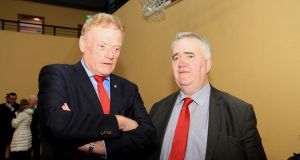 Longford-Westmeath returning officer Imelda Brannigan has announced that the count is continuing,

Speaking just after midnight, in the first update at the Keenagh count centre since it restarted at 2.30pm on Wednesday, Ms Brannigan said the first part of the recount was almost complete,

“Figures have then to be reconciled to advance the recount and inputted into the computer to generate a complete result for the 13 counts.”

She said “this will take some time. The recount is continuing,”

Ms Brannigan is expected to explain her decision on disputed votes to candidates in the tussle between Fine Gael’s James Bannon and Labour’s Willie Penrose.

The two outgoing TDs are waiting to see which of them will be eliminated from the race for the last seat in the four-seat constituency.

The returning officer will explain her decision to the candidates and their legal teams and then declare the count result.

There were just two votes between them with Mr Penrose ahead and Mr Bannon due to be eliminated when the Fine Gael candidate called a recount.

There is no clear indication of what time the announcement of the count result will be but it is thought likely early in the morning.

Fine Gael’s Peter Burke is expected to be elected in third place. Fianna Fail’s Robert Troy topped the poll and was elected first. Independent TD Kevin ‘Boxer’ Moran was second to cross the line and become a first-time TD.

Ms Brannigan and her team recounted all 55,276 votes and documented disputed or questionable votes, which is understood to have had an impact on the quota.

The count team arrived in at 2pm this afternoon for the distribution of the votes of the candidate to be eliminated but it has been delayed because of consideration of the disputed votes. Late on Wednesday night the count staff were still waiting.

It is speculated that just half of Mr Moran’s surplus transferred and that 45 per bent went to Mr Penrose, 15 per cent to each of the two Fine Gael candidates and 15 per cent to Sinn Féin’s Paul Hogan.

Tánaiste and Labour leader Joan Burton, who arrived at the GAA club in Keenagh on Wednesday, described the recount as “Ireland’s version of the hanging chads”.

It was incredibly exciting and stressful, she said.

Referring to the delay in announcing the result, she said: “They have simply had to be extraordinarily careful in the recheck and recount of everything.

“They have literally had to meticulously recount and re-examine all of the papers and then do all the figures, because there were a number of papers excluded and that in turn means the quota had to be recalculated if only in a very marginal way.

“So this is really a nail-biting time. But we remain optimistic.”

Down to the wire

Sinn Féin finance spokesman Pearse Doherty, who arrived at the count centre shortly after 6pm with the party’s director of elections Matt Carthy, said if Mr Penrose goes out before Mr Bannon, it gives Mr Hogan a better chance of survival. “If it’s the other way around you can see the transfers going in the opposite direction,” he said. “We’re still in there and that’s what you’d be hoping for at this late stage of the count.”

He said it was a great tribute to Mr Hogan and the campaign team that he was still in the contest “down to the wire”.

On Saturday night Mr Penrose conceded defeat before realising he was back in contention. Later he said: “I am not that confident of winning the thing but I am there to be knocked out again.”

The election of Mr Penrose is crucial for the Labour Party. If he fails to hold onto his seat, the party would only have six TDs and lose automatic speaking rights in the Dáil.

Minister for Public Expenditure Brendan Howlin, who is at the count, said he had been told Mr Penrose was ahead “but I don’t know. Nobody knows.”

Asked about the implications of the vote, Mr Howlin said: “Obviously it’s really important to have Willie as part of the Labour team in the Dáil.

Mr Penrose was a very experienced parliamentarian with an understanding of rural Ireland “that brings a perspective to the party that we will enormously miss”, he said.

“We also need the seventh member of the parliamentary team because that gives us group status and automatic rights of speaking in some debates.”

Mr Howlin said he had heard comments by new Anti-Austerity Alliance-People Before Profit TD Bríd Smith, whose grouping, with six TDs, currently has the same number of TDs as Labour.

Ms Smith said Labour and been battered and bruised and deserved it because of austerity, water charges and property tax. She also called for Labour to be removed from the trade union movement.

“There are old traditions that people are dignified in victory and kind to people who put themselves on the ballot paper and lose,” Mr Howlin said. “Obviously those traditions are not universally adhered to.

“The election is over. The people have spoken. We accept their view.”

Mr Howlin said he had spoken to most of his colleagues and they all believed they had done “what was right by the country in the last five years”.

He said they could have stood back, “built the party up again be stronger and probably be the dominant force in our parliament, but at what cost to our people?”

“We don’t see chaos as a mechanism to be exploited for our own political ends.

“God knows we’ve made plenty of mistakes, because we were making real time decisions in a crisis.

He stressed however that Labour “did steer the ship” to a better place. “Even our bitterest enemies would not deny that Ireland is a better place than it was five years ago.”

1 Woman stranded in Ireland due to pandemic has ‘miracle baby’
2 Covid-19: Public urged to ‘stay at home’ as 1,025 further cases confirmed in State
3 Australia demands answers after women taken from Qatar Airways flight and strip-searched
4 Transmission of Covid-19 on flight into Ireland linked to 59 infections
5 Effectiveness of Covid-19 vaccine could be known before end of year – Fauci
Real news has value SUBSCRIBE