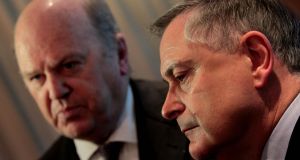 Brendan Howlin has the support of party chairman Willie Penrose. He is also said to have the backing of two of the other potential leadership contenders, Seán Sherlock and Jan O’Sullivan. Photograph: The Irish Times

Former minister for public expenditure Brendan Howlin is considering contesting the leadership of the Labour Party following the resignation of Joan Burton.

Mr Howlin is said to be under enormous pressure from members of the parliamentary party to stand for the role.

The former minister, who has stood twice before and lost both times, had been reluctant to enter a leadership contest but has altered his position over the past number of days after several key Labour figures contacted him.

Former minister for the environment Alan Kelly is to stand for the position and is expected to announce his leadership bid on the Late Late Show on Friday. He will need another TD to second his nomination.

The Labour Party national executive will meet this weekend to decide on the process to replace Ms Burton. Nominations for the position will open next week and contenders will have a number of days to put their name forward.

If there is only one nomination, the former tánaiste can be replaced within a fortnight. However, if there is a contest, it will take a number of weeks, with senior figures hoping it will be concluded by the end of July.

Mr Howlin has a great deal of support within the Labour parliamentary party and many members are encouraging him to contest the role.

Mr Kelly has significant levels of support among members outside of Dublin.

However, due to his introduction of the water charges, Mr Kelly would struggle to secure support from members living in the capital.

All four potential candidates yesterday refused to be drawn on their intentions, insisting it was a day for Ms Burton.

The former tánaiste said she would have no direct role in the choosing of her successor. She said the candidates were colleagues and friends and hoped collaboration could be the order of the day.

Ms Burton said she hoped whoever was chosen would continue to implement core Labour values.

Mr Penrose said it was his belief the party should agree on a preferred candidate.