TDs are in two categories: muted and mutinous 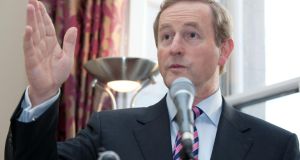 It can be argued voters never fully bought into Enda Kenny as Taoiseach.

Nobody in the Government parties is pretending to be happy with the latest Irish Times/Ipsos MRBI poll, and those on the Independent benches can hardly contain their glee.

It is no exaggeration to say Enda Kenny is now another two awful polls from having to face serious questions about his leadership of Fine Gael, and from the crucial middle ground of the parliamentary party rather than the usual awkward squad.

Mr Justice Nial Fennelly’s interim report into the resignation of Martin Callinan is also due in the first months of 2015.

If it is in any way negative towards Kenny, the pressure on the Taoiseach could become unbearable.

It can be argued voters never fully bought into Enda Kenny and the Fine Gael 2011 general election campaign acknowledged that by effectively selling the frontbench team rather than Kenny as Taoiseach in waiting.

Those doubts and weaknesses are re-emerging.

“People are in two categories this morning: muted and mutinous,” said one Fine Gaeler trudging into Leinster House this morning. “But everyone just wants to get through to Christmas and assess it in January.”

“We need a John Redwood, ” said one deputy in reference to the Tory frontbencher who mounted an ultimately doomed leadership challenge to John Major in 1995.

One Fine Gael minister put it: “This is a crisis of party politics.”

Frank Flannery – the ghost from Kenny’s past who seemingly floats across the stage with glee these days – summed up the mood of many in the parliamentary party when he told Newstalk’s Breakfast the Coalition leadership has until the spring to turn things around.

By then, the reasoning goes, the effect of the budget measures will have sunk in and Fine Gael and Labour will have had the novelty of a catastrophe-free few months – no easy feat, given their performance over the past 12 months.

For Labour, the drop in Joan Burton’s approval ratings will compound the dip in the party’s popularity.

Party strategists had maintained Burton’s personal popularity would help them recover some ground. However, at 25 per cent, she is now around the same level as Michéal Martin and Gerry Adams, although above Kenny, who is on a dire 19 per cent.

Sinn Féin and Fianna Fáil will be happy – both are pretty much holding their own.

But this morning’s figures are especially devastating for the Government since many felt they steadied the ship in the past fortnight by dealing with the water charges issue and mounting strong attacks on their opponents, particularly Sinn Féin.

Flannery acknowledged the Government has made a stab at communicating in recent weeks.

But maybe voters are beyond such politics. Perhaps the Sinn Féin bashing backfired, particularly at a time when people are so disenchanted with politics.

Maybe a positive message would find a more receptive audience – when was the last time the country was sold something it could believe in, rather than something it just had to accept?