Kelly to criticise waste collection industry as ‘race to the bottom’ 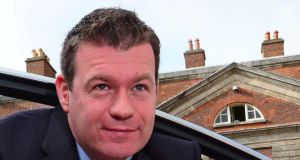 Alan Kelly: Advocate of competition in the market but is unhappy with service to customers

Minister for the Environment Alan Kelly will strongly criticise the private domestic waste collection industry in a speech today, alleging it has become involved in a “race to the bottom”.

The Labour Party deputy leader will make his first major speech on waste policy at the Environment Ireland conference and will reserve his most serious remarks for municipal waste collection.

While maintaining he is an advocate of competition in the market, Mr Kelly will nonetheless contend that Ireland moved too quickly from a situation where overstretched local authorities had full responsibility for municipal waste collection to one where the market has become completely privatised.

A draft of the speech, which has been seen by The Irish Times, states: “This is the worst of both worlds in my view. And it has to change.”

He will warn the industry it is in the “last chance saloon” and must comply with new tighter regulations to be introduced next year.

He is also highly critical of the level of customer service being offered by some collection companies, whom he claims have been “merely ticking boxes” in their customer charters, or in their promises to provide three-bin systems.

He will also refer to the high number of enforcement actions that have had to be taken by the Environmental Protection Agency and local authorities against operators.

Some operators have also failed to offer brown bin collection services, despite the fact this was a requirement under the 2012 Household Food Waste Regulations.

“All of these factors suggest to me that we have an industry that needs to be radically shaken up, modernised and professionalised. And it is my intention to do this and end this ‘race to the bottom,’ ” the draft of the speech notes.

New regulations next year will oblige waste collection companies to sign up to specifically mandated service levels as well as to statutory customer charters. There will also be strong implementation of a ban on below-cost selling.

In a passage which could be perceived as a reference to the dispute at the Greyhound company, he says the race to the bottom is also “directly contributing to a destabilising of the industrial relations situation in the waste sector”.

The Minister said he supports a statutory wage-setting mechanism for the industry to ensure stability, certainty and industrial peace.

Mr Kelly said if the reforms he was proposing were not adhered to, he would consider introducing a different market structure in the future to ensure a service that was responsive to customers, the environment, and employees.