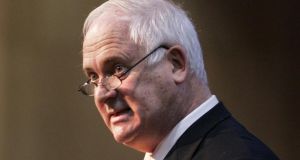 John Bruton: “Like WT Cosgrave and Éamon de Valera after them, those politicians, Redmond, Dillon and [Joseph] Devlin, lived and worked for Ireland. But that’s apparently not romantic enough to reimagine by our poets and seers.” Photographer: Dara Mac Dónaill / The Irish Times Dara Mac Donaill

Former taoiseach John Bruton has said the Proclamation and what he calls the “rebellion of 1916” left no room for compromise and created a “recipe for endless conflict”.

Mr Bruton said schoolchildren, who have been taught about the Proclamation as part of the Rising centenary commemorations, should also learn about John Redmond and John Dillon of the Irish Parliamentary Party.

In a paper delivered at an event in Iveagh House, Dublin, on Monday, Mr Bruton argued that Redmond and Dillon succeeded in getting Home Rule passed into law.

“Redmond and Dillon, whose achievement of getting Home Rule finally passed on September 18th, 1914 – a feat that eluded O’Connell and Parnell – were politicians, who achieved what they did by tough but peaceful parliamentary methods,” Mr Bruton said.

“That centenary, two years ago, of an achievement by these mere politicians was almost completely ignored by the Irish State.

“Like WT Cosgrave and Éamon de Valera after them, those politicians, Redmond, Dillon and [Joseph] Devlin, lived and worked for Ireland. But that’s apparently not romantic enough to reimagine by our poets and seers.

“But they got the job done. They got Home Rule passed into law, they won back the land. In contrast, the 32-county Republic, proclaimed at the GPO in 1916, never came into existence.”

He also said the Proclamation left “no room for compromise”.

“That needs to be explained to Ireland’s schoolchildren, too,” he said. “The Proclamation, which our schoolchildren are now being asked to regard as the founding stone of our democracy, left no room at all for democratic negotiation. It is important also to stress that the 1916 rebellion was not launched just to fight for, or to obtain, an Irish Republic.

“The Republic was proclaimed already to exist, once declared outside the GPO, and to exist as a ‘sovereign independent state’ of 32 counties. No room for compromise there. Such a state does not even now exist. Yet its existence was declared to be ‘indefeasible’ in the words of the Proclamation. A recipe for endless conflict.”