Joan Burton has been elected as the 11th leader of the Labour Party following a landslide victory in her leadership contest with Alex White. Video: Fiach Kelly 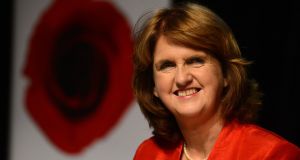 04/07/2014 NEWSTanaiste Joan Burton, the new Leader of the Labour Party pictured after her election in he Mansion Houseyesterday.Photograph: Cyril Byrne / THE IRISH TIMES 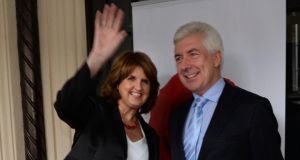 Minister of State Alex White has congratulated Joan Burton on becoming the next leader of the Labour Party. Photograph: Dara Mac Dónaill / The Irish Times. 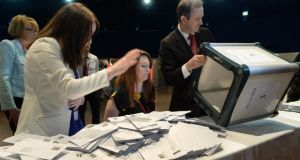 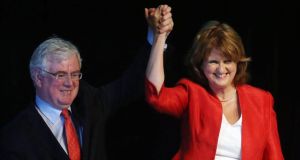 Joan Burton has been elected as the 11th leader of the Labour Party following a landslide victory in her leadership contest with Alex White.

Ms Burton, who is the first woman to be elected leader of her party, will also become Tánaiste in the Coalition Government with Fine Gael.

She won the election with some 2,094 votes out of 2,720, to Mr White’s 607. The overwhelming scale of her victory will be seen as a strong endorsement of the credentials of the Dublin West TD from members of the party, as well as giving her a mandate to effect major changes, if she so wishes.

Tipperary North TD Alan Kelly was the runaway leader of the four contestants for deputy leader and was declared elected with 51 per cent of the vote.

Speaking to party parliamentarians and members in the Mansion House after the official count was announced, Ms Burton praised the contribution of outgoing leader and Tánaiste Eamon Gilmore and said the contest between her and Mr White over the past month had resulted in debates that were deep and necessary.

She said the would put great emphasis on a social recovery as well as economic recovery and specifically referred to housing as one area for discussions with Taoiseach Enda Kenny in the coming days.

In her speech, she again said housing as well as health would be among her priorities in talks with Fine Gael.

She said the latest set of economic data published this week showed that there was scope to put some of the Labour priority policies into action.

Mr White, in his address, said she had his complete support and also congratulated her for becoming the first woman leader of the party. “For that reason alone this is an historic occasion,” he said.

As he arrived in the Mansion House, Mr White was asked if he expected a ministry himself. He responded that that was entirely a decision for Ms Burton but added that the sole reason he had entered the race was to ensure that the debate in the party centred around renewal.

Ms Burton (65), a TD for Dublin West, was first elected in 1992 and was elected deputy leader of the party in 2007. She is Minister for Social Protection and is expected to keep that portfolio.

Much focus will not turn on who she promotes to senior Minister positions. Mr Kelly is seen as a certainty and there is a strong possibility that Mr White will also be promoted. Many of the party’s TDs and Senators believes her other choice will be a woman with speculation focusing on Kathleen Lynch. Minister for Public Expenditure Brendan Howlin, seen as a linchpin for the party, will remain in his current position.